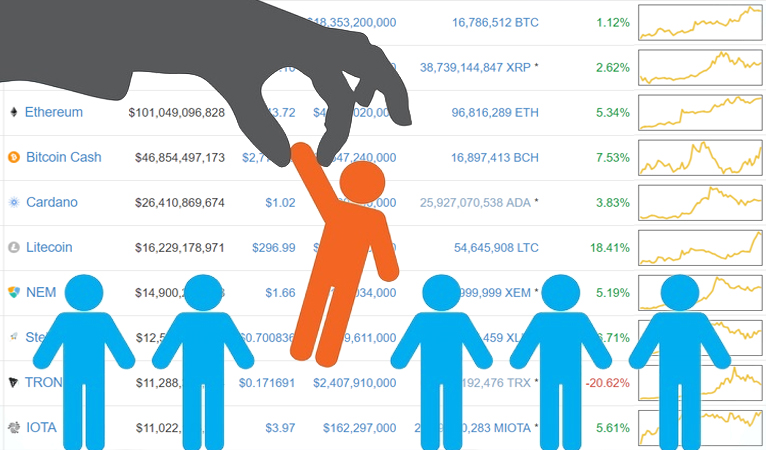 The cryptocurrency field’s combined market capitalization is fast approaching the $1 trillion mark as the emergent field surges forward. However, how accurate is the term “cryptocurrency” when referring to many of these new stars?

Let’s remember that the reason we’re all here, the reason there’s a whole separate category for cryptocurrency instead of being lumped into existing fields like simple tech and finance is because it’s inherently different. Bitcoin paved the way, not simply by pioneering blockchain technology, but by including a certain collection of attributes that made it, at least at the start, perfect money. Its present value, along with the value of all current blockchain-derived assets, comes from that winning combination, and while in my opinion Dash presently encompasses all these the best, several other top coins can qualify as well.

How many of the top ten coins right now still hold up? Use this handy list of attributes to see what is and isn’t “true crypto.”

Anyone can use it

Probably the biggest value proposition of cryptocurrency is its inclusive nature. Anyone can acquire some and use it, send it to anyone in the world, and no one can stop them. When financial institutions can be coerced into freezing account balances, and tech companies can censor particular users, this open participation principle is priceless.

Anyone can help run it

Another key principle of decentralization is not only in the use of the network, but in how it’s run. If anyone can use the network, but have no ability to participate in what makes it work, then in practice users have to rely on those running the network to ensure that it will still be feasible to use for them. If the network’s custodians become compromised in any way, this has the practical effect of defeating the first principle.

Anyone can fork the code

Finally, in case something bad and irreversible happens to the network, it must be able to be forked and started fresh (or with a few minor tweaks). This gives all users recourse with a compromised network: they can simply copy the code and switch over to using the new chain instead. This makes cryptocurrency extremely hard to keep down, even when faced with direct opposition from hostile actors. The ability to fork the code is the ultimate preservation of decentralization.

One of the major reasons that cryptocurrencies, starting with Bitcoin, have risen so high against the prevailing fiat currency systems is their tendency to have a fairly limited supply. While central banks inflate their currencies, causing them to lose value year after year, the opposite happens with cryptocurrencies, many of which have a hard-coded supply limit, decreasing rate of inflation, or a low enough (and fixed) emission rate to retain value. There is no fear that the network’s stewards will simply create more units or arbitrarily add zeroes on to the supply, as has happened time and time again with fiat currencies.

A closely linked partner to the open-use decentralization principle, immutability indicates that the essential properties of the currency will stay the same over time. One unit will always be one unit, written in the blockchain as in stone. Balances will not be changed or frozen, transactions will not be reversed, and nothing fundamental will change in the currency itself over time.

And finally, in order to accrue enough value in the first place to serve as a store thereof, a cryptocurrency must have some initial use case. This can be fast and cheap transactions, a globally transparent ledger, enhanced privacy features, etc. The original use case of what later becomes primarily a store of value can’t itself be a store of value, since in the beginning there is no value to store.