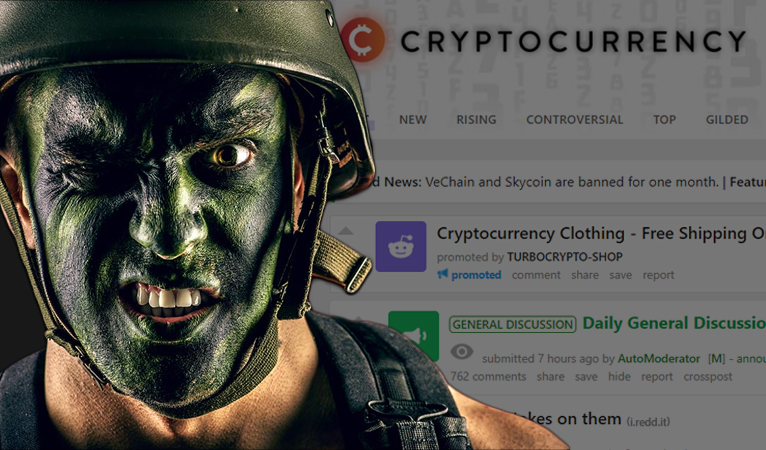 This is a rant. Well, maybe a discussion. Maybe a bit of a ranty discussion. But I want to talk about how the crypto community talks to one another because I don’t think it is healthy. Let’s have some coffee and chat.

Cryptocurrencies currently have many audiences. The initial audience included folks (this author, for example) that envisioned a currency with the same world-changing potential as the internet and open source. As many cryptos rose in value, they quickly caught the eye of those looking for speculative appreciation of value, ideologies be damned. As the news cycle caught on, the mainstream audience started to pay attention. Their perception of cryptocurrencies is all over the place, but certainly, most are taking a more tentative approach.

This added attention has also given the non-nerd crowd a peek behind the curtain unveiling the communities surrounding the cryptocurrencies. And it’s not a pretty picture. There is so much infighting, sniping, FUD, and of course trolling. So much trolling. Some banter manifests as real debate and voices of concern. But a lot is steeped in ideology. Often discussions are truly passionate. But quite a bit has malicious intent or is linked to pure manipulative greed. All of this is padded with heaps of inane, juvenile trolling.

What so many people don’t remember is that we are really one community. But one community that has splintered into many factions. Factions that ultimately weaken the whole community.

Of the many communities, the granddaddy of them all is the Bitcoin community. The legendary disagreements within that community almost all surround the scaling debate(s) and to a lesser extent maybe anonymity. The debate rages on relegating Bitcoin (for now) to being Gold 2.0 and spinning off a number of forks and making a lot more space for the many so-called “altcoins”.

Of course, there have been spinoffs before. Dash exists because the Bitcoin community didn’t want to add changes made by Evan Duffield. Specifically, he wanted to add what is now called “PrivateSend” functionality to Bitcoin in order to make it more anonymous (more fungible) [1]. This required introducing the concept of specialized nodes and a mixing of coins performed at the protocol level. Sure, he proposed a dramatic change and the Bitcoin community understandably said “no”. Evan merrily went off and created his own project. No sweat.

Over time, other currencies showed up with various emphases of their own: Zcash and Monero are almost singularly focused on privacy. Ethereum wants to be a decentralized smart-contract compute engine of sorts. Ripple is a pseudo-decentralized highly liquid crypto hoping to become the backbone of financial institutional value transfer. A rift in the Ripple community spawned Stellar who has similar interests but not focused on financial institutions per ce and a heavier focus on enabling 2nd and 3rd world communities of people. Specialization leads to innovation.

There are a lot of cool things going on. Jump into any of the chat communities of these projects and they are all a’buzz with activity, filled with passionate people and discussion.

But dive into Reddit and r/bitcoin, r/cryptocurrencies, and other subreddits, and it sounds like a kids playground where everyone is both the worst bully and the most picked on victim all at the same time. It’s downright foul.

It doesn’t help that the crypto-world is a’swarm with crooks and scammers looking for a quick profit at the expense of some poor sap. These are bottom feeders, and if you have enough of them hanging around, it changes the tone of things. Just look at how many criminal elements inhabit Wall Street. Remove the filters and regulators, and boom, you have described a sizable chunk of the crypto-community.

On top of that, there are maturity issues. Cryptocurrencies are not mainstream yet. They are used most extensively as speculative instruments, as grand experiments, or as enablements of marginal economies. Marginal economies include cross-border remittance and trade. The gray and dark market economies are also well represented. With events like the rise (and fall) of Silk Road, the Mt. Gox implosion, numerous exchange hacks, and ICO scams, and you now have a community that mainstream folks view as suspect and with caution, and community members that are easily instigated and chronically defensive. But just like the internet (and the web), with maturity, more mainstream markets will open up.

Some of the divisiveness is good. Constructive criticism leads to better engineering and encourages strong communities to do better. Dash is one of those communities. Dash Nation is passionate and pushes to improve internal processes, works together to solve problems, and ultimately, issues or withholds funds to incentivize projects that aim to make Dash better and stronger —The Dash DAO is a game-changing innovation.

These are the currencies that I think that matter the most: Bitcoin (Core and Cash), Dash, Litecoin, Monero, Zcash. These are the non-currencies that I think matter: Ethereum, Ripple, Stellar, Tether. This is my opinion and very subject to change. And then there is the pile of projects that are not quite fully formed —Cardano, NEM, EOS, NEO, etc. There are also a huge variety of projects that may matter or not: Augur, Lisk, Siacoin, Zencoin, Rootstock, etc. etc. In 3 years’ time. Heck, in 1 year’s time, the mix of projects that truly matter will change dramatically. Projects you never heard of will rise or appear out of the ether (har har), and several in the top twenty (market cap) will likely sink or even fade into obscurity.

All of these projects have reason to be criticized. Many have imperfect histories. Some only matter largely due to momentum, and yet they still sometimes surprise you. Litecoin, for example, is written off by most people (beyond speculators) as having no real differentiating purpose, but… they continue to push the boundaries a bit and experiment where Bitcoin won’t. And of all those I mentioned, maybe Tether has the most questions being raised currently because they may not be accounting appropriately for how their token is issued. But for now, they still matter. Ripple is a semi-closed system, run by a for-profit company, and has some distribution and centralization concerns. But, ecosystems like that probably have a niche purpose. NEO abandoned proof-of-work and may have uncomfortable ties to the Chinese government. Or maybe those ties are overblown [2]. Ethereum is planning to move to proof-of-stake, which will a be a grand experiment—a model that has attracted a lot of skeptics. Ethereum is also extremely complex and has been prone to a number of issues, programming mistakes, and bugs in the past. But boy is it promising tech! Dash had a rough start with a crazy mining bug at the beginning followed by a decision to drive-on anyway that many find controversial. But 4 years later and with a lot of water under the bridge, Dash is making impressive strides [3]. Maybe more importantly, Dash (similarly with many of the top projects) is not resting on its laurels declaring “we’re feature complete!” Dash continues to innovate. This entire space is still evolving [4].

Criticism is good! But trash talk is counterproductive. I personally want to see all the best of these projects succeed. I am okay if a number of them crash and burn, but let them crash and burn in the market. Eventually, I would like to see some consolidation and weeding out of weak projects, but weeded out because they are weak or failed projects, not because they are trolled to death. Maybe Zcash remains a minor specialized currency forever, for example. Maybe Bitcoin Cash really does become “The One Real Bitcoin”. Or maybe Bitcoin Core will truly forever be the “reserve currency” of the crypto-verse. Maybe the Lightning Network will make all that contention a moot point someday. And perhaps Dash will truly become what people use for everyday value transfer.

We are on the same team. Aren’t we? It’s not a zero-sum game. The pie is not fixed in size and the top projects are not scams. They really aren’t. Yes, every project wants to be in the top ten (market cap). The top ten matters, but then again, it doesn’t. The market will eventually decide the winners and losers. Attempting to tear down a project with FUD and trolling is simply juvenile and counterproductive.

So why am I writing this? Dash Nation [5] is already a community that strives to improve the dialogue. But the larger crypto community is still very toxic. Strong criticism is fine. But constructive criticism is even better. Even the occasionally heated or passionate rant is fine as long as we come back to center and discuss things openly as adults. Trolling is not helpful. It’s bullying, childish, and otherwise malicious. It’s the lowest form of criticism. Trolling is the equivalent of folks with imperfect physiques body-shaming other people with imperfect physiques. This pattern of dialogue sets back progress, casts a dim light on the whole space, and drives good people away. Isn’t the naysaying outside of the community bad enough [6]?

There is a term for this: the “Narcissism of Small Differences” [7]. It’s a pattern of criticism common among families and good friends. The internet has made this manifest in online communities. And if it gets out of control, it can be toxic. Dash Nation has taken extraordinary measures to guide her community to avoid such toxicity. Community member Tao of Satoshi has really been instrumental in setting the tone, but even the Dash community can get out of hand at times. It only takes one troll…

Let’s be nicer to each other, folks!

When you criticize, strive for a mature tone. If you have a real criticism, deliver it with at least some maturity and respect and don’t get accusatory or passively aggressive. If you have difficulty framing a comment without coming across constructively, have someone help you with the dialogue. Non-constructive commentary and questions are generally met with dismissal or even silence, and are, of course, sometimes with equally counter-productive heat. Be civil.

We are one team ultimately. We are trying to change the world. Let’s do it from a position of strength, both in technology and community. </rant>

[1] tungfa. “The Origin of Dash and the Future of Money.” Cryptocurrency Talk. 1 May 2016, cryptocurrencytalk.com/topic/46627-the-origin-of-dash-and-the-future-of-money/. Accessed 06 May 2018. This author almost wishes we called the PrivateSend feature FungibleSend, but that certainly doesn’t roll off the tongue very well. FungiSend? Can you imagine what the public would have thought that meant? 😉

[6] So many legacy financial institutional naysayers (while the banks, ironically, invest heavily in the sector):

[7] “The Narcissism of Small Differences.” Wikipedia. Accessed 6 Mar. 2018. The narcissism of small differences: is the thesis that it is precisely communities with adjoining territories and close relationships that engage in constant feuds and mutual ridicule because of hypersensitivity to details of differentiation.