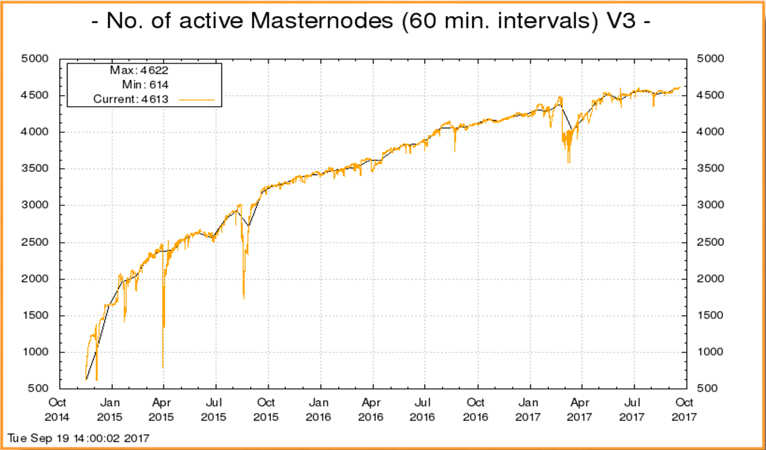 Over the years, critics have claimed that the Dash Masternode network is susceptible to centralization. Initially, the charge was that only a few early adopters own Masternodes, and so they control the network. This argument has begun to fade as it’s become clear that Masternode owners are a diverse bunch. However, Dash detractors have come up with another potential centralization threat: when the price of Dash skyrockets, existing Masternode owners will sell and only big pockets will be able to afford buying them out and setting up their own Masternodes. According to this argument, the network will then become centralized around these wealthy players.

Could this happen? Is the Masternode network in danger of being only in the hands of those with big pockets, i.e. corporations and government agencies? Fortunately, we have some data to help us evaluate this criticism.

How Do Masternode Owners Respond to Huge Price Increases?

Consider this calendar year. The price of Dash has risen from $11 at the beginning of the year to over $400 earlier this month. That’s a 3,536% increase in only eight months! This means that one Masternode was worth over $400,000—a large enough sum to be considered life-changing for many people. Surely, if Masternode owners are going to sell because the value of their Masternodes increases, many would have done so this year. Let’s look at the data to see if this actually happened (note: all data taken from dashninja.pl as of 9/18/17).

What we want to examine is how long each Masternode has been active. If a Masternode is sold, then the node is dropped from the active list, because the 1,000 Dash collateral would be transferred to another owner. So as long as a Masternode is active, it has not been sold.

Before looking more closely at how many Masternodes have gone offline during this year’s price increase, note that there are other reasons a Masternode might be dropped from the network. The Masternode owner might move the Masternode to another physical server, which would require being dropped from the active list temporarily. Or the Masternode owner might move the 1,000 collateral to another address (for example, if she were moving the collateral to a hardware wallet). Or the server itself could experience a problem and go down for a few hours. In all such cases, the Masternode would be dropped from the payment queue and show as a “new” Masternode later, even though it didn’t change ownership. So when we look at how many Masternodes have been active during the recent price run, we must remember that this is the minimum number of Masternodes that have not been sold. In all likelihood, the number is actually much higher, since the events described above are not rare.

The longest any current Masternode has been active is around 31 weeks. This is how long it’s been since all Masternodes were required to perform a major upgrade, during which all Masternodes had to update their software and be rebooted. Since that upgrade, 558 Masternodes (12% of total active) have been continuously active. At first, this might appear a small number, but remember the various reasons a Masternode can become temporarily inactive without the owner selling it. To get a sense if there is a “sell-off” when prices spike, we need to further examine how many Masternodes remained active during this year’s price increases.

Dash briefly reached $200 on July 5, 2017, which was over ten weeks ago, meaning one Masternode was worth $200,000. Those who owned a Masternode at that point have since had an opportunity to sell their Masternodes for around $400,000. Yet, looking at the Masternode stats, there are currently 3,264 Masternodes (71% of the total active) that have been running for longer than ten weeks. This means that these owners saw a doubling of their investment and didn’t sell.

What about since Dash was $100? That first occurred on May 7, 2017, nineteen weeks ago. According to the data, there are 2,190 Masternodes (48% of the total active) that have been running for over nineteen weeks. That means at least almost half of all Masternode owners saw a quadrupling of their value in just a few months without selling them.

Again, note these are the minimum possible numbers. All Masternodes that went offline for reasons other than selling would not be included, even though ownership did not change.

Confidence in the Future

Clearly, Masternode owners have generally held onto their Masternodes in spite of a large value increase in their investment. Why is this the case? Two primary reasons come to mind.

Second, the stability of the Masternode owners reflects confidence in the future of Dash. Yes, the price of Dash has increased from $11 to $400 this year, but most Masternode owners likely believe it will increase even more in the future. They are willing to defer a big payout now for a potentially much larger one down the road (or, more likely, much larger block reward payments down the road).

Of course, over time Masternodes will be bought and sold. There are many reasons an owner might sell her Masternode, many of them unrelated to her feelings about Dash. Yet up to now most Masternode owners have continued to run their Masternodes even during dramatic price rises. The threat of Masternode ownership becoming centralized under big-pocket investors is, at least so far, a myth not backed by the data.