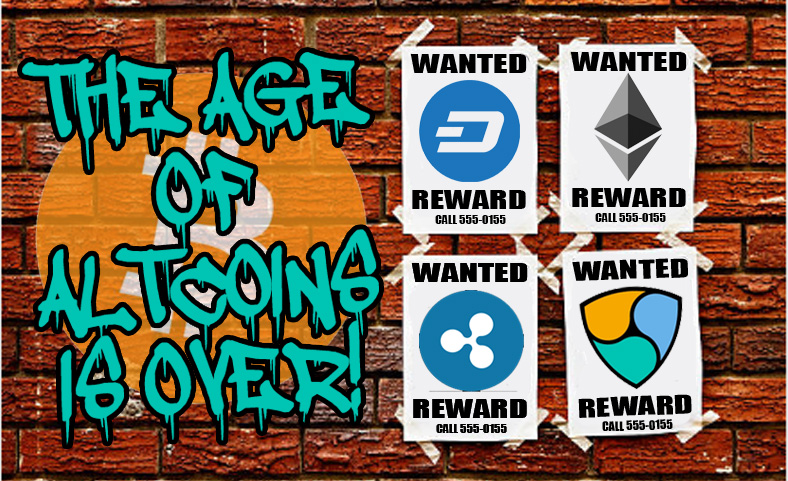 A year ago I wrote an article about the age of altcoins, the new era where other coins complemented Bitcoin by providing functionality in other areas. It now looks like that era is over.

This year’s cryptocurrency market has been quite exciting to watch, with major upsets across the whole field, including massive pumps all around. In particular, Ripple and Ethereum saw massive gains, making up $20 billion between the two of them. This has caused Bitcoin’s market dominance percentage to fall from 87% at the beginning of the year to 48% and dropping. The time of “one crypto to rule them all” has clearly passed.

The term “alt,” short for “alternative,” is used to describe thing that fall outside the prevailing norm. In cryptocurrency, altcoins suggest that Bitcoin is the only cryptocurrency worth paying attention to while all others are simply rejects from the mainstream with no proper role in the normal crypto economy. It was easy to simply dismiss the technology, communities, and development teams behind the rest of the coins when Bitcoin was 90% of the field, or at least the majority. Now that it’s simply the largest player in the field but no longer makes up a majority alone, it’s high time to retire the term “altcoin.”

To a certain extent, this diversification of the cryptocurrency field was inevitable. However, it certainly wasn’t on track to happen this quickly before Bitcoin’s speeding vehicle got stuck in the mud of scaling issues. As a natural result of becoming successful and rising exponentially in use, the remaining one-megabyte block size limit provoked a massive transaction backlog, resulting in a battle of ever-rising fees. While Bitcoin still “works” the same as ever, several-dollar fees and slow transactions significantly limit its use case, while their cause, a vicious scaling battle with no end in sight, dampened trust in its long-term viability. If not for these issues, Bitcoin would have undoubtedly claimed a much greater portion of cryptocurrency’s recent growth.

Crypto use cases are now distributed more evenly across the field

During the early days of blockchain technology, most use cases were shoehorned into Bitcoin: speculation, international transfers, digital cash, solution for the unbanked, anonymous currency, etc. Now, each role is delegated to its own coin or coins. Bitcoin has settled nicely into use as digital gold, but continues to be less and less useful for its other original purposes as the rest of the cryptocurrency field picks up the slack.

The age of altcoins is over. We are all cryptocurrencies now.