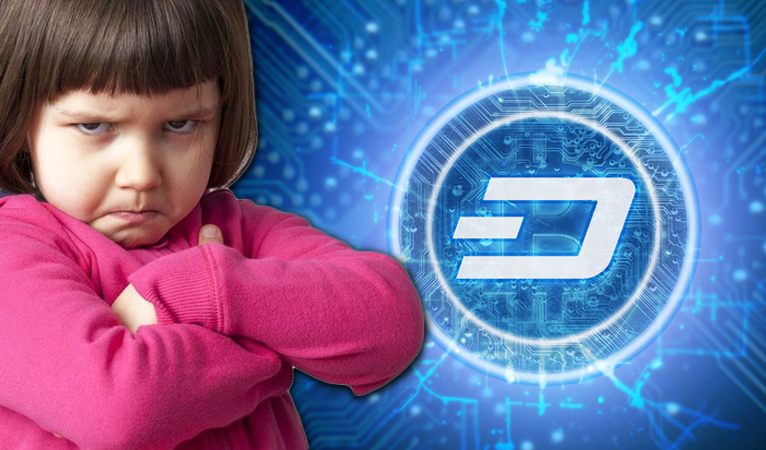 If you’ve been around a while, you’ll have noticed that Dash is the black sheep of the cryptocurrency world. Like Ron Paul during his US presidential runs, Dash consistently remains excluded, ignored, and derided in favor of much smaller, less developed, and less promising projects. You can almost feel the room go cold when you mention your Dash fandom in a group of Bitcoiners. What a buzzkill.

And guess what? It’ll always be this way. Dash won’t ever gain the respect of the cryptocurrency community we presently know. You know why? Because it has nothing to do with anything real. No, it has nothing to do with its initial mining bug, as most cryptocurrency projects have had even more uneven launches, and most enjoy far poorer supply distributions. No, it isn’t Dash’s privacy, which remains unbeaten and is light years ahead of some critics who don’t even have any anonymity functions to begin with. And it definitely isn’t decentralization, where Dash has the most diversified ecosystem resistant to the undue influence of any one single actor or group in the entire space. Dash’s redheaded step child status with Bitcoiners has nothing to do with anything technological, or, well, anything real. It’s all social and cultural. Here’s why.

The cryptocurrency movement started as a fringe group populated by old-school cypherpunks and crazy crypto-anarchists. This initial group of hardcore adherents are what catapulted Bitcoin from a random underground project to the forefront of the world stage. Though its presence and name brand has grown significantly since then, the core of its user base still pays homage to these original qualities. Bitcoin’s civil war certainly didn’t help, with the Core/Blockstream side appealing constantly and heavily to a sense of cypherpunk social identity. This has extended to the rest of the core group of cryptocurrencies and their communities. We have exceptions like Dash and Bitcoin Cash, but the existence of dissent doesn’t negate the fact that the predominant techno-clique overwhelmingly won out.

The result has been a minor, exclusionary culture focused around this cypherpunk identity. Instead of turning from a fringe movement rejected by everyone to one with greater acceptance, Bitcoiners largely reinforced that fringe status by turning away outsiders the way they themselves had been turned away in the past. This represented a radical approach shift from “Everyone should use Bitcoin” to “You can’t sit with us.” Technology be damned, any coin that isn’t “one of the cool kids” will forever be derided by this group.

Following the theme of isolated social group, there’s an overt hostility over any attempt to appeal to the average person. The prevailing Bitcoiner sentiment is thus: “You normies made fun of us for years, but now that we’re rich and powerful, now you have to come to us if you want some of our success.” While this is a perfectly understandable thought process, it’s a dead in the water approach to wide adoption. Getting people to drastically change their financial behavior is a very tall order, and making them wade through a new and hostile technocratic culture to get there makes the chances of such a change taking place extremely slim. To reach anyone, you have to talk to them on their level.

Dash knows this, and ever since the rebranding from Darkcoin the community and developers have been focused on the ultimate goal of getting everyone to use it. This overture to the average “muggle” is viewed as a sort of betrayal of the sacred culture of Bitcoin, almost as an admission that skeptics were right to dismiss its potential in the early days. Additionally, a user-friendly interface, branding, and onboarding seems “scammy” to those used to going through great difficulty to understand new tech. The thought process is, if you’re selling it to total newbies, you must not be able to fool anyone who has a clue. In that line of thinking, if it’s complicated and difficult to use, it must be “righteous” since you aren’t fooling anybody. Dash’s approach is the opposite of this, and so its aim to be used by the average person is looked upon with skepticism.

One cannot appreciate what one does not understand

Now we go to one of the biggest psychological misconceptions in the space: expertise is one-dimensional. The more intricately you can design Segwit or the more working parts you can successfully engineer together with Lightning without increasing the block size one bit, the more savvy and hardcore you are, the conventional wisdom goes. However, there are many different types of knowledge and skill, and even though Dash remains one of the most visionary projects in the space, that fact won’t be appreciated by those who have zero skill or competence in the areas upon which Dash focuses. One can’t appreciate the genius of sporks unless one first sees an inherent problem in messy and disruptive hard fork upgrades for a commercially-trafficked network. One doesn’t care about transactions permanently settled in 1.3 seconds without understanding the stress of a business owner living on margins who lost money due to a chargeback, cutting dangerously close to not being able to make bills. One doesn’t care about thorough research and measures for massive on-chain scaling before the network receives anywhere near that volume if one completely ignores the pain of users on a broken and congested network for years before a scaling solution has been discovered. And, if one doesn’t understand the principles of sound money and the value of controlling your own funds, trusting your money and liquidity to a payment channel for long periods of time, if not indefinitely, somehow doesn’t seem like a disastrous idea.

Even the non-technical and user-facing side of things leverages a substantial level of expertise and knowledge that goes completely ignored by those who are completely ignorant outside of their insular realm of coding. Yes, reducing sharp angles and introducing a tertiary softer color to a logo does have a psychological effect which will result in more female users being amenable to the product, and strategic logo placement in key contexts does instill a subconscious familiarity and trust. A publicly-traded company allowing institutional investors and traditional stock traders to invest in Dash’s infrastructure does grow users far more than forcing everyone to use traditional crypto exchanges. And finally, an interface leveraging the human psychology of names and social networks will have a massively larger impact than sticking with ugly and confusing public key addresses. These are all very important to the long-term success of a project like Dash that wants to be used by as many people as frequently as possible, but a community that’s severely lacking in these knowledge departments won’t appreciate its beauty and elegance. If anything, it’s the opposite: the more Dash achieves in areas that most cypherpunks remain hopelessly incompetent in, the more it looks like it’s “up to something fishy.”

The cult of Satoshi is strong

It’s hard to admit sometimes, but the cryptoverse does have some religious elements to its psychology. The mythological creature Satoshi Nakamoto came out of nowhere to bestow an amazing creation upon mankind before selflessly ascending to crypto heaven as the faithful hope for his potential return. Yes, Bitcoin was a work of genius, and a shockingly complete and solid product for an alpha, with its mark on the world (and continuing market dominance) a testament to these truths. However, in the crypto cult Bitcoin will always come first. Satoshi is infallible, and his creation must be honored above any that came after. You see this prevailing attitude in most of the top old-school coins, with Ethereum insisting on doing something completely different and not competitive, Litecoin relegating itself to an assistant to Bitcoin, and Monero’s lead developer paying constant homage to the Bitcoin Core development team. These projects can all have their success, as long as it doesn’t interfere with that of the gospel of Satoshi.

This is where things get tricky for Dash. While based on the Bitcoin code and building on the original model and the success that it had, Dash has committed the essential heresy of trying to be number one. While most of Dash’s community has no problem with Bitcoin and would welcome a world where they coexist, its very goal of being the top cryptocurrency for payments, as well as the best money in the world, puts it in a sort of competition with its ancestor. In the view of the cypherpunk crypto community, Dash is the legendary Icarus who flew too close to the sun, and for its arrogance and hubris must be punished in a spectacular crash. This goal of ultimate success will forever earn Dash the ire of its crypto brethren.

When the world has collectively moved on, it still won’t change

Right now, the cryptosphere doesn’t value Dash. It’s important to note that this will likely never change. Time will pass, Dash will become a more common payment system, process more transactions that the rest of the top ten coins combined, whatever the level of success, it won’t matter. For the reasons outlined above, no amount of success will change the exclusion from the social group of OG crypto nerds.

So there you have it: Dash won’t ever be loved or respected by the current crypto-clique. What a bummer. When it’s used as the day-to-day payment system for major portions of the planet, that will be the time to think about crying over being kicked out of the kindergarten cool kids group many years ago.