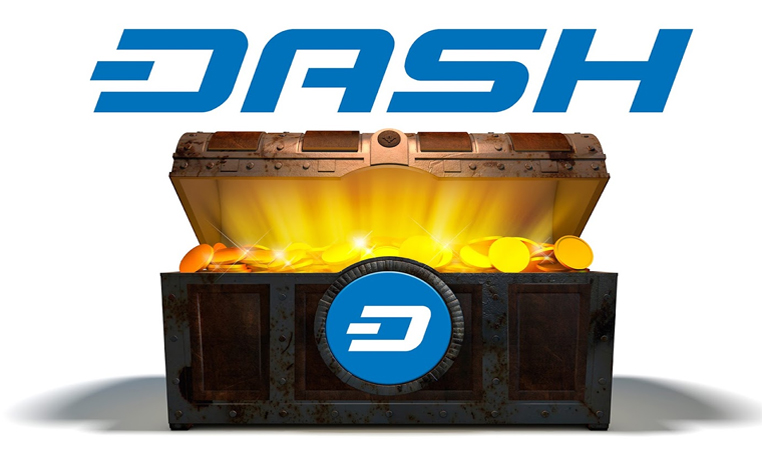 The current batch of Dash Treasury proposals was just funded on November 3rd.  It comprised 30 different proposals that received 6,022 Dash valued at $1,627,000 with the Dash price at $270.24 on the morning of Nov 3rd.  While the Dash / USD price was down this still provided a very impressive amount of funding for important projects. 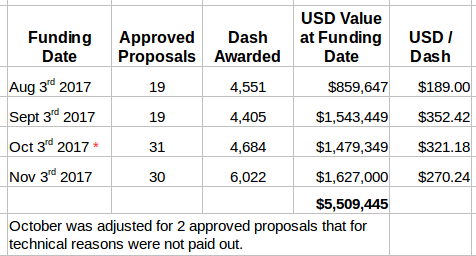 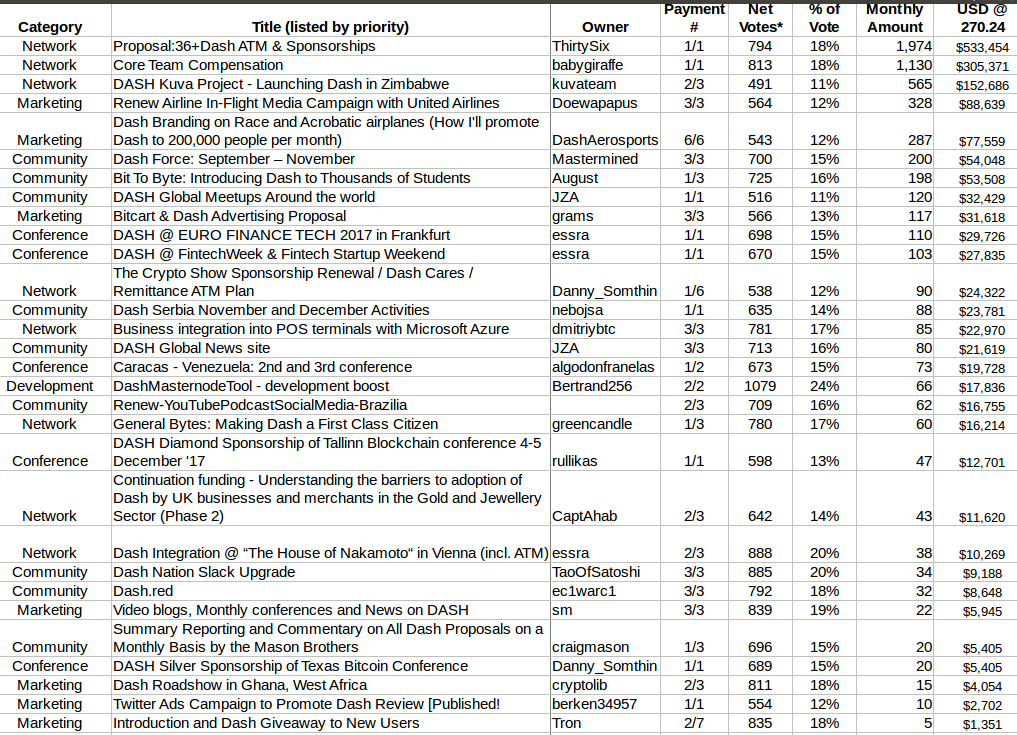 The top 3 proposals received just under $1M of funding. With the single largest proposal being a “make good” submission by Alt 36 as their 2 proposals last month were approved but not paid out because the proposal system could not pay out to a multi-sig wallet address.

I will again break the funded proposals into arbitrary groupings to discuss the highlights for this month.

These proposals are focused on growing Dash – reaching out beyond the current community trying to bring in new business and user transactions.

This proposal – hopefully the last by Alt 36 – will fund 30 newly developed ATMs and a series of cannabis related conference sponsorships.  This funding brings Alt 36 to their scheduled full system roll out between now and the end of the year.  Lets all hope that they can successfully bring this project home and begin to aggressively signup retail cannabis stores.

This proposal funds the Dash Core Group’s ongoing compensation costs – including all developers, administrative, and support staff – at market rates for base pay, excluding benefits or bonuses.

After five months without a budget request for the Dash Core Group compensation, we have sufficiently drawn down our reserves and require further funding for the core team. The team has expanded to 50 paid team members, and we have plans to further expand this to 56 over the coming two months. The current run-rate, including the anticipated cost of the additional 6 roles is ~$298,280 monthly. This is an average of ~$5,300 / month / contributor.

Now we know that the core team salaries are just under $300K a month.

This project proposes to launch a Dash-based cryptocurrency service in Zimbabwe, to allow individuals and businesses an easier way to trade while addressing the current cash crisis. Following this, we intend to expand Kuvacash to the wider African continent as an inexpensive and convenient digital-cash service for day-to-day trading and payments.

This is a large and aggressive project.  The team seems to have a good background and are providing regular updates.  They make a good case for the project which will be a great achievement once it is up and running.  Support by masternode owners seems to be dropping (down 23 net votes from last month) with one more payment due next month.

This will add full buy/sell functionality for Dash to all General Bytes ATMs and add Dash to their CortexPay POS system.

The other proposals in this grouping have been covered recently by DFN. Assuming that all of these projects are successfully completed there will be huge growth in the Dash network.

These proposals focus on education and helping the Dash community.

Dash Force (who I am employed by) is the single largest proposal.  DF does a lot of community support and runs Dash Force News and DiscoverDash.com among other things.

Dash Global run by JZA has expanded this month to include News sites, Youtube videos and now meetups. This month provided 200 Dash for these endeavors.  As there is not one single site to follow what is being done (and I only understand English) it is not easy to see all of the “Dash Global” productions.

Bit To Byte is an organization that employs high school and college age students as mentors to teach after school STEM (Science, Technology, Engineering, and Mathematics) related classes paid in Dash/Hour for elementary school students. Three branches make up the Bit To Byte Foundation, the STEM Mentorship Program, the Building Futures Program, and the Emerging Technologies Program.

August has become a very active member of the Dash community and has worked hard to move this proposal toward approval.

The top four proposals in the marketing group are all in their last month of funding.  The largest is the airline in-flight advertising proposal.  How will we know if this was a success?

This is also the last month for the 6 months of funding for Dash Aerosports and the third of three for Bitcart Advertising.

The Dash network is supporting a number of conferences in widespread parts of the world.

“Essra”Jan Heinrich Meyer has 3 different proposals getting funding this month.  The two conference proposals are for $56K which will get sponsorships at two events during  EURO FINANCE WEEK  in Frankfurt Germany. DASH @ FintechWeek & Fintech Startup Weekend and DASH @ EURO FINANCE TECH 2017 in Frankfurt.

Also being funded are two more conferences in Venezuela. The success of the first conference has lead to this proposal for a much higher level of funding for these educational events.

In the beginning of December, Tallinn will host the largest conference in Northern Europe: Moontec17, devoted to blockchain technology and its implementation in various industries.Communication with the event organizer has resulted with an understanding about the options for sponsoring. We’ve come to terms at price and wish to see Dash attending Moontec17 as a General sponsor, considered as a core-organizer.

It was another exciting month for the Dash Treasury and masternode owners. Lets all hope that these projects work out to benefit the Dash community.  I am particularly excited about the Alt 36 and General Bytes proposals as “when” they succeed they will have a big direct impact.

The marketing and conference proposals all have the ability to positively impact individuals that may go on to invent in Dash. The big “sleeper” proposal could be Bit To Byte with its focus on young people by starting their interest in crypto and Dash.