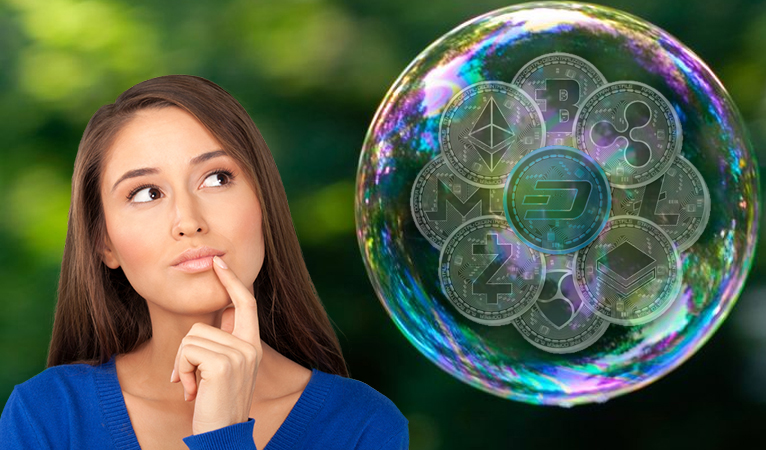 Though some analysts are still holding out hope for a sudden reversal, it looks like the great 2017 bubble has come to an end. Bitcoin, and altcoins like Dash, have seen their prices take two steps forward and three steps back in a steady decline since late December. Those who have only bought as much as they can afford have little to worry about, as Bitcoin has had four major bubbles before and will almost certainly have a fifth. Eventually.

Cryptocurrencies aren’t particularly good at the slow and steady growth exemplified by stocks and other “traditional” assets. Instead, they tend to advance their price through massive bubbles which eventually pop, but not without retaining some of their gains. For example, the Dash (called “Darkcoin” at the time) experienced a major bubble in May 2014, rising from about $0.50 to $15 in the space of six weeks.

Dash’s bubble popped, dropping the price as low as $1.80 at one point. However, following 2017’s peak price of $1,600 per Dash, it’s virtually certain that the currency will end up being worth significantly more than its $15 price in the last bubble. Even a 95% drop from all-time highs would equate to a price of $80 per Dash, which is still a massive gain for those who have been invested since 2016 or earlier.

Now that this bubble has ended, what will be the signs of the next one? Many attributed the latest rise to the involvement of Wall Street and institutional investors. The next will likely be caused by one of the following factors.

ETF – If/when the SEC approves a Bitcoin exchange traded fund (ETF), it will make access to Bitcoin much easier for ordinary investors to gain exposure. Shares in an ETF can be purchased and sold just as easily as a mutual fund, and can be held in tax-advantaged accounts like 401(k)s and IRAs. When gold got its first ETF, the price increased nearly five-fold.

Sovereign funds – Eventually, governments are likely to take notice of Bitcoin and start adding it to their sovereign wealth funds and their foreign currency reserves. Just as central banks are the largest owners of gold in the world, they may end up becoming a large owner of cryptocurrency. There is a significant first-mover advantage here, with the first nation to take on Bitcoin exposure likely triggering others to do the same.

Major adoption – If a major retailer were to adopt Bitcoin or another digital currency, it could lead to the next price bubble. For years, Amazon has been kind of the “holy grail” for retail adoption, although other major retailers like Walmart could make a big impact as well. Likewise, if a major bank were to fully integrate cryptocurrency into their online banking, it could cause a major surge in investor interest.

This last area is where Dash really has the potential to shine. While Bitcoin is faced with slow confirmation times, periodically high fees, low transaction throughput and poor governance, Dash has a solution to all those problems. Bitcoiners seem to be content with their currency serving merely as digital gold, at least for now. Other altcoins are focusing on smart contracts and other high-tech solutions such as cloud computing, cloud storage, AI and the like.

By focusing on payments, Dash has given itself another avenue for price growth. Sure, the next crypto bubble will be a tide that raises all boats, just as happened in 2017. But with Dash, we may not have to wait for the next general crypto bubble before seeing our price surge.

If Dash’s efforts in Zimbabwe and Venezuela are successful, for instance, we could gain widespread (and price-increasing) levels of adoption. If Alt36 and similar retail-oriented proposals end up panning out, we could likewise see significant price growth. If Core Team (or any other Dash DAO) is successful at integrating with a major payment network or remittance network, price growth would likely follow.