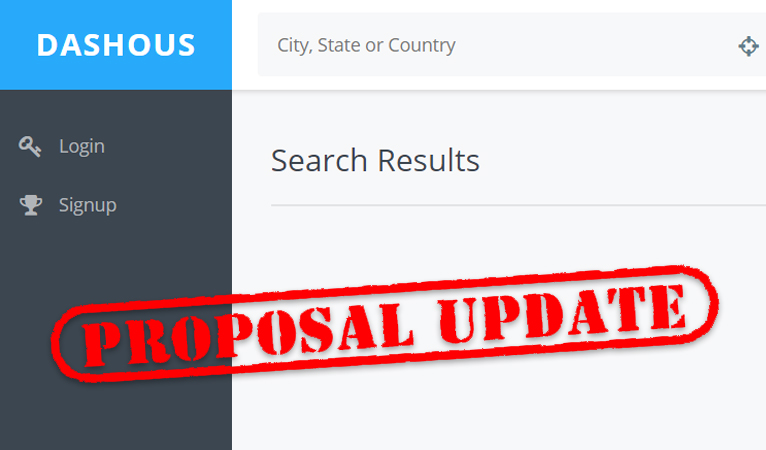 How do you buy your Dash? Looking for a pretty anonymous way to buy or sell Dash? Since the beginning of 2017 there has been a “local bitcoins for Dash” AKA Dashous

Localbitcoins.com started in 2012 before the massive bubble and MtGox implosion.  It was a way to connect with other bitcoiners and exchange other currencies for bitcoin.  A simple and reliable service.  Who knows where Bitcoin would have been without it.

I am proposing to create a site called Dashous that will start out in a similar way.  It will be a place to post and respond to ads with the intention to meet in person and exchange other currencies for Dash.  Think the simplicity of Craigslist meets the reputation system of Ebay.  It will be Open Source, completely Dash-focused, and free-to-use.

Many of the comments in the proposal centered around the name “Dashous” Brett explained it here:

The name itself came from a combination of the word “Dash” and “Righteous”.  Righteous is a word that Amanda B Johnson says a lot, and it seemed fitting since this whole thing was her idea.

In the proposal Brett set out a detailed analysis of what would be in the “MVP” (minimum viable product) and estimates of the time required – he is a seasoned software professional so seemed to know exactly what he wanted to accomplish and how to get there. Dashous is open source software and you can find the code on github.

I searched for listings in Florida where I live and found 3 but they are several hours from where I live. 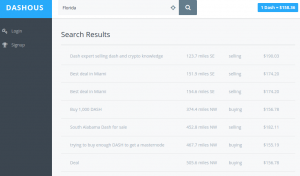 Once you click on one of the listings you get this detail: 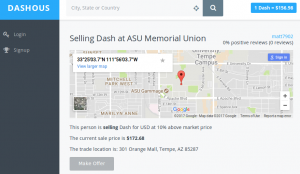 I find it to be an easy to use and attractive site. For the $ value of the Dash in the proposal at the time it was entered the site was a very good deal (my personal opinion).  What it needs is more people using it.

I asked Brett a few questions about the site:

Any plans for the future of the site?

The site is built with the intention of pushing the real communication to email, to take me out of the loop.  This is good karma for the privacy of the users, but also protects me from a legal standpoint.  But I know users would prefer to have a conversation within the app and not share emails with almost-strangers.  Adding an encrypted internal chat system would make everyone happy.  I could then simplify the signup flow ( removing email verification ), and the whole experience could be improved.  You would only add your email if you wanted notifications.

But there’s still a lot of work to do and little time to do it.  My day job has me quite busy this year.

Is the site getting much traffic? – I see the listings some of which are priced pretty good – just nothing near where I live (north Florida)

There have been 528 signups to date and people continue to sign up every day.  Unfortunately they are spread pretty thin around the world, and we are not really to the point of “critical mass” that would allow anyone to find trades anywhere they happen to be.

There are 197 active trade requests around the world.  So there are options if you’re lucky or willing to drive.

To be honest, the biggest take away from the whole experience was just how ingenious the treasury/voting system is in Dash.  I am accustomed to losing money on passion projects.  Any attempt to make a similar service for the Bitcoin community would not only receive zero funding, but also plenty of trolling on reddit for trying to do something different.

The voting system provides a much needed source of truth and sanity in our community.  Some jerk with 5 reddit accounts can completely stop a project from getting off the ground by making you think that nobody wants it.  But you can’t argue with the masternode votes, and they can’t be faked.

What got you into crypto? Dash?

Like a lot of people, I heard about Bitcoin in 2014 after the big price spike and MtGox collapse.  The more I looked into the technology, the more fascinated I was.  After a while, I started to see the writing on the wall.  The leaders in Bitcoin were not making good decisions and the currency was headed in the wrong direction.

I first heard about Dash on Amanda’s Daily Decrypt show, she was at a conference in Mexico and interviewing people.  Many of them said they were most interested in Dash.  I took a short peek at Dash.org and didn’t notice anything special.  Then she had an episode that was sponsored by Dash, and she described the experience.  It sounded really cool.

After that I continued to look into it, bought some, and like with Bitcoin in 2014, it just continued to snowball.  I truly think that Dash is on the right path for mass adoption.  If it’s going to happen, this is the currency to do it first.

I would really like to see this service succeed.  Dash needs to have as many marketplaces as possible.  Big exchanges like Kraken,  post offices and ATM networks, bank based services like Wall of Coins and local face-to-face markets like Dashous.  The more on and off ramps for fiat that Dash has the more valuable the network becomes.