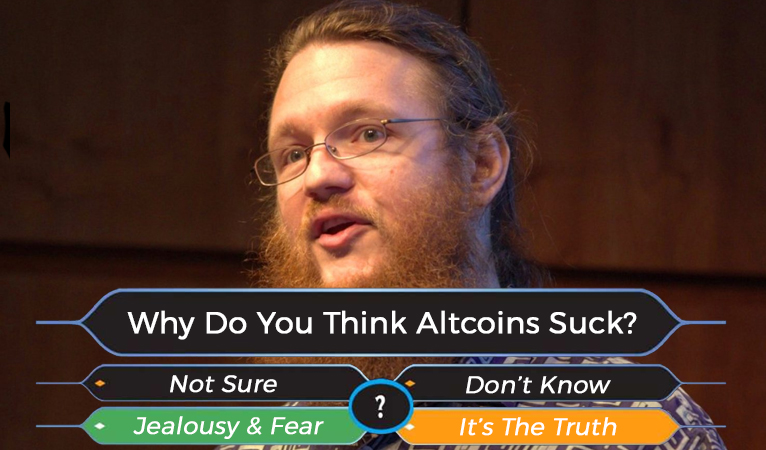 Bitcoin Core developer and Blockstream CTO is no friend of cryptocurrencies other than Bitcoin, famously calling Dash “snake oil.” However, he took his hating to a whole new level during a recent talk on side chains. Seemingly out of the blue, he brings up “altcoins,” or cryptocurrencies that are not Bitcoin, as a threat to Bitcoin. His few arguments quite frankly don’t make much sense, and seem to work against each other. Here’s why Greg Maxwell is dead wrong on “altcoins,” whether you’re rooting for one Bitcoin to rule them all or hoping for a diverse ecosystem.

Altcoins are no threat to Bitcoin’s network effect

One of the arguments by Maxwell is that using other coins detracts from Bitcoin’s network effect, weakening and threatening its potential. The problem with this argument is, in a world where a new coin can be minted instantly without limit, the one big advantage that keeps Bitcoin on top is the strength of its network. If market dominance makes a coin better, then less-established coins are therefore inferior. Why would anyone use an inferior coin in any volume meaningful enough to threaten its superior competitor? Unless, of course, one coin is better than Bitcoin and makes inroads despite its network effect disadvantage, but clearly Maxwell doesn’t believe this.

The next argument employed by Maxwell is that Bitcoin can simply implement any tech that another coin pioneers. If anything, that’s a ringing endorsement of trying out other chains to safely test new approaches before risking funds on a well-used network. By that logic there should be as many altcoins as possible, trying out all manner different tweak to blockchain technology: off-chain scaling, larger blocks, encrypted privacy, off-chain privacy, etc. Bitcoin can watch terrible ideas crash and burn, and snap up good ones using their considerable network advantage to stay firmly on top.

Fun fact: this has already worked in Bitcoin’s favor, according to Maxwell’s priorities. Bitcoin was unable to reach a consensus on implementing Segwit, however Litecoin succeeded in this task, and in so doing proved, at least in the short term, that such an upgrade would not be disastrous to the network. Bitcoin is now on a clear track to implement Segwit after a compromise agreement. This is a salient example of another coin facilitating the implementation of an upgrade approved by Maxwell.

Bitcoin’s sameness works against it

According to Maxwell, Bitcoin is slower-moving than other networks, and therefore changes more gradually. This would mean that, by the time it implements an innovation dreamed up by another project, that innovation might already be obsolete, or well-used and improved upon by its original coin. In the modern world of technology evolving at a breakneck pace, “slow-moving” is a death knell.

Using a single network for all purposes provides a single point of both success and failure, and both are bad for crypto. To begin with, a single point of failure can be a liability, even across a distributed network. If a way to hamper the main chain is discovered, the entire innovation that is cryptocurrency goes down and is set back years. Unfortunately, this has already happened to a certain degree, with Bitcoin’s scaling struggle grinding its whole economy to a crawl, all 85%+ of it. In order to survive this issue, the ecosystem diversified to other networks, and now Bitcoin retains a mere half of the dominance it once held.

Even without disaster, using one network for all purposes is problematic. Different use cases necessitate different features, and something that makes a network better for one purpose can make it worse for another. For example, encrypted, on-chain, always-on privacy features can cause transactions to become massive and difficult to deploy on mobile devices, defeating a use case for micro-tipping and regular, convenient transactions. We have seen how centralizing technologies around one single chain has had issues with Ethereum’s congestion due to the ICO buying craze, subjecting other transactions for different purposes to the same fate. Multiple chains allows many different uses to operate at peak efficiency.

If you were waiting for a sign from heaven that you should get into cryptocurrencies other than Bitcoin, this is it. Remember when that guy from MasterCard was hating on Bitcoin in the vaguest and most disjointed statement seen in recent times, sweating and nervously smiling the whole time, with a look of panic in his eyes? Well, this is it for cryptocurrency. There was no reason for Maxwell to mention other coins, let alone hate on them in such a messy and random manner. You know what that is? Fear. It’s knowledge that Bitcoin’s dominance is done, and an attempt to slow its decline, without any idea how to do so. It’s the Ceausescu moment we’ve been waiting for.

Bitcoin let the cat out of the bag. There’s no turning back now. Welcome to the crypto era.