Get ready for the Great American Pilgrimage TV show coming soon to RT 📽️ starting 26th November! The show features Stephen Baldwin and Max Keiser DASHing across America to ask and discover what everyday Americans believe it means to be American.

The TV show was funded by a DASH treasury proposal in return for DASH sponsorship of the 16 episode road-trip show traveling America’s heartland.

Included in the series will be appearances from DASH Aerosports Racer Scott Farnsworth including DASH Force One, Chuck Williams Head of UI/UX Development from DASH Core team and Danny Sessoms from the Crypto show. The main focus of proposal was for branding and product placement to help raise awareness of DASH as the champion of digital cash.

The trailer of the show above features a DASH branded RV as well as multiple video clips taken from episodes of Max and Stephen modelling DASH apparel.

RT Network is an English-language Russian international television network, that is available in over 100 different countries, with an audience of 700 million, including 85 million in the United States.

As of today The Great American Pilgrimage trailer is being actively shown on RT between scheduled show breaks to promote the show.

Max is the host of “The Keiser Report” a half-hour program on financial news and analysis, for RT since 2009. Max kindly agreed to answer the following questions.

For people just learning about the GAP could you please summarize what the show is about?

I think what drew Stephen, Stacy and I together was a desire to connect with Americans one-on-one and to reassert our feelings about what America is all about and what it means to be American.

How important was it for you to have a digital currency involved in sponsorship of the show.

The word that came up most often on this pilgrimage was freedom. Crypto is the purest expression of freedom we’ve seen since the Constitution and the Bill of Rights. Financial freedom, free from state interference is the new ‘no taxation without representation’.

As a user and holder of DASH what do you value as its most important features.

DASH is emerging as the crypto payment rail while Bitcoin asserts itself as Gold 2.0. I suggest those frustrated by the Bitcoin scaling debate to embrace DASH for payments and leave Bitcoin Core alone to continue working on Gold 2.0

Is the GAP the first blockchain funded series to be shown on a TV network? Did you actively set out to achieve this?

Yes. I am happy that my plan to leverage my associations with RT and the crypto community and my 30 yr friendship with Stephen – along with the incredible writing skills of Stacy – has resulted in such a great project.

Why should the public and businesses use DASH as a digital currency instead of traditional legacy banking methods?

DASH is a visa/master card killer. Plus, the governance / masternode system means the more people use DASH the more opportunities for projects like the gap. Not only banking, but society as a whole can be rebuilt using a DAO like DASH – and DASH is the top DAO around and I don’t see that changing.

You first mentioned DASH in 2014 to your audience on E606 of the Keiser Report when DASH was valued at just $11, as of today DASH is valued at $446. What made you like DASH enough to mention it on your show just after it launched?

Keiser Report has been committed to crypto since 2011. In 2014 – We featured DASH because it was clear they were trying to take crypto to new places. I love the entrepreneurialism of DASH.

If the GAP does well, will there be a season 2? Have you discussed this possibility with Stephen or production team yet? Any ideas how we could integrate DASH more in to the show?

Stephen has said he wants to do season 2, 3, 4, just keep going. I think we must, in season two mine DASH on the RV – and get much more active in spreading the word of crypto and what it means to be financially free in ways never before possible in the greatest country on Earth. 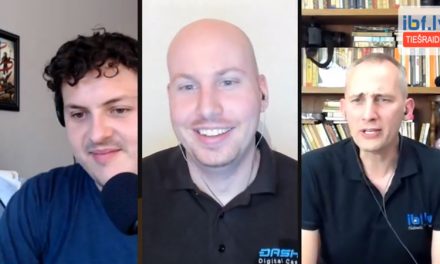