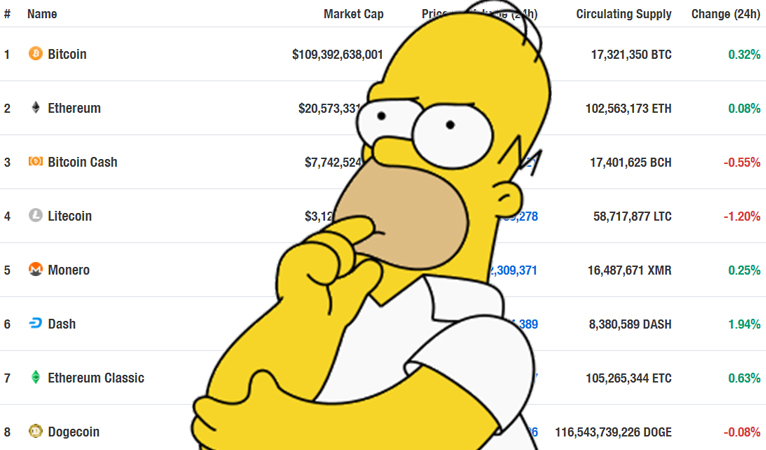 One of the strongest narratives in the midst of the present crypto bear market is that of speculation vs. use, of what is perceived as “real” value compared with “fake” value of investors buying it for speculative reasons. Much of the discussion revloves around classifying most projects as speculative, while preferred ones are branded as legitimate. In reality, however, the differences between the two sources of valuation are not so black and white, and projects do not simply transition from all speculative to all practical over time. In fact, speculation is likely to persist during the entire lifespan of the project, but shift to different aspects and developments.

One misconception among many die-hard adoption-first advocates (like myself) is that speculative value is somehow “fake” or not legitimate. To be clear, price fixing and manipulation does lead to values that have no direct bearing in reality, however on its own speculation has real value in the same way anything else does: people believe it does. As former Dash developer Chuck Williams is fond of saying, all value is belief. It is people’s belief, backed up by their willingness to put their money behind what they believe, that gives something value. If someone believes something will have commercial use and puts their money behind it, that value is as real as that same person buying that same product to actually use in commerce.

The key difference is that, with practical use, the belief behind the valuation is much easier and quicker to realize: if I buy a cup of coffee, I have a very reasonable expectation backed up by evidence that the coffee will serve a practical purpose for me in the short term, while if I invest in a coffee startup I have much less tangible evidence of getting something out of it, and a longer time frame over which to expect it. The longer speculation takes to translate to practical use, the more fragile its value becomes.

As projects mature they acquire commercial use between waves of speculation

Now when it comes to blockchain projects, value isn’t binary: speculative or practical. There are different forms of speculative value as there are different things that are being speculated on, and practical use in commerce does not necessarily herald the definitive end of speculation, nor should it. Initially, at the whitepaper stage, investors are speculating that the technology outlined will someday exist and be completed. Once it exists, we speculate on the technology proving useful as intended, and holding up in the use cases for which it was designed. This can be proved with network stress tests to prove scaling, research to prove advanced privacy features can’t be broken, and other tests to prove that the network works well and as intended under the circumstances for which it was designed. Note that this can include practical use in commerce, but in a limited capacity and for mostly hobbyist purposes. Next we have commercial use, where some meaningful group of people is buying it and using it for regular economic activity because it represents the best solution to their need available, without being artificially subsidized or simply catering to use by fans. Practical commercial use is when the technology makes economic sense to use on its own, without philosophical or other ulterior incentives. 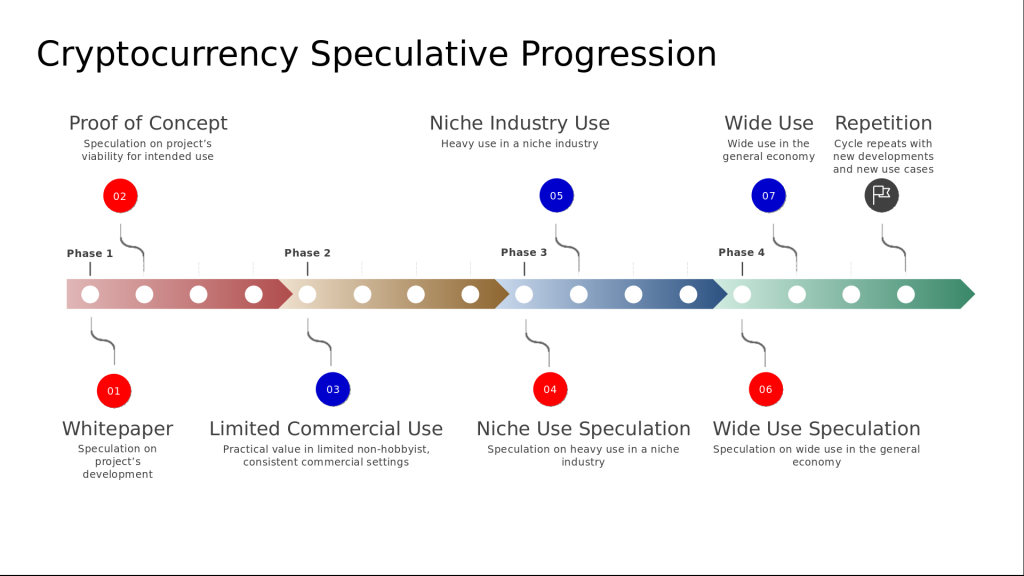 Once practical use is achieved, however, speculation doesn’t necessarily stop there, unless a project’s entire goal was to see real economic use in some limited capacity and then stop there. The next phase is speculation on whether or not the technology will see dominant usage in a particular limited field or industry, such as cryptocurrency for gift card resale, fitness supplement and legal cannabis industry, or remittances. Once the technology becomes absolutely essential and universally used in a particular field, it attains the next level of commercial use value, as practically speaking it’s necessary for anyone wishing to efficiently operate in that particular field. Next is speculation on wide commercial use outside of its narrow field of specialty, and finally comes practical value as a tool with wide economic use. Portions of this cycle may be repeated as new industries are targeted for specialized use or as new phases of technological development are planned, implemented, and then applied to specific cases or the market as a whole.

Note that speculation and commercial use have very different effects on price volatility. Speculation-based valuation can fluctuate wildly as assumptions on how much the project will be worth in the future can change at a moment’s notice. Commercial use, however, depends on a much more narrow channel of fluctuation, as too drastic a change in value can completely invalidate the economic soundness of a practical use case. Speculation can create demand for the product at a huge potential range of prices, whereas commercial use includes demand only at specific profitable price ranges. For most of their history cryptocurrencies have proven to be mainly in the speculative, and have experienced the price volatility to match. However, it’s worth noting that Bitcoin experienced a relatively high degree of price stability during its period of peak commercial use, beating the stability of the British pound at that time.

Cryptocurrency is mostly speculative, but at different phases of use and speculation

Now where does the state of cryptocurrency today fit into all this? For the most part, projects tend to be stuck in the first two steps, and never enter a practical use phase. Bitcoin solidly reached the third phase with limited but consistent use as a payments system, and began making inroads into the fourth and fifth steps with some use in online gambling, remittances, fundraising for controversial causes such as Wikileaks, etc. However, due to scaling limitations, it has lost much of its initial practical use, with new speculation on its eventual scaling prospects through off-chain solutions such as the Lightning network. Ethereum remained largely on the second step of attempting to prove its viability for its intended purpose while achieving some limited practical use as an entry point for developers seeking to work in the smart contract space. However, in a likely unplanned twist, it then jumped straight to solid footing in the fifth step as it became the top tool for raising startup capital, kicking off the ICO boom. At its peak, people were legitimately buying Ethereum because it enabled them to do something of economic value that they were otherwise unable to do practically. However, scaling limitations combined with regulatory threats have largely kicked it back to square one, consisting of speculation on the eventual completion of certain scaling upgrades (though some of its former practical use cases still persist).

As for other projects, few have advanced past the first two steps. Zcash remains largely in the first two steps with continuing development and refinement of its product, while Monero has largely completed the first speculative steps and is attempting to achieve uses for enhanced privacy beyond hobby status, as darknet purchases remain for the time being largely in Bitcoin or fiat currencies. Where does this leave Dash? Largely in the first steps of limited commercial use (particularly in Venezuela), with heavy targeting of specific industries for solid niche use, such as the cannabis industry, though these still remain mostly speculative. Parallel to these, the development of the Evolution platform continues, repeating the cycle and having achieved the first speculative step.

The race to majority commercial use valuation is on

Now, the various cryptocurrencies are locked in a contest to become the first to see most of their value derived from commercial, rather than speculative, use. While no coin to my knowledge has solidly entered this phase at this point, I would argue that Bitcoin may have briefly during the period immediately prior to its scaling issues. When a cryptocurrency firmly and consistently achieves this majority-commercial status, this will likely shift the whole field in that direction, with less investor patience for gaps and long stretches between speculation and delivery of practical use. As for the first-to-market cryptocurrency, it will likely not only see much higher valuation due to deriving it from two aspects (speculation and commerce), but its speculative value will likely be much higher as well since it will be built on confidence of having delivered solid working products in the past.

How long until a cryptocurrency escapes the majority speculation phase, and which one will be the first to this achievement? We may not have to wait much longer to find out.