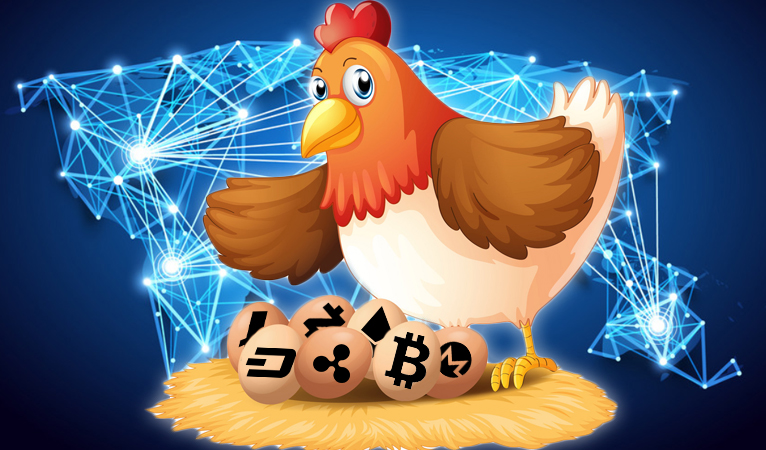 Tim Draper recently declared, “Only cryptocurrencies will be used For payments in 5 years” (Tahir). That’s pretty bold. But he may be onto something. Even if he is not precisely on target with his prediction, he may not be as wildly bullish as one may initially think.

It is generally agreed that for an asset to be a currency, it needs to embody these characteristics: it needs to be a medium of exchange, a store of value, and a unit of account (the first two probably more prominently). Dash, and a sampling of other cryptocurrencies, meet these requirements for the most part, but not necessarily from a position of strength. But cryptocurrencies have the potential to become world currencies with equal or better standing as compared to other world currencies. Indeed, maybe even becoming the global default, as Draper contends. But what is it going to take to get there? I am not sure anyone really has a definitive answer to that, but current trends perhaps give us some insight into one of the many possible future paths they could take.

In the first several years of Bitcoin’s existence, the early adopters (the innovators along the adoption lifecycle curve) were almost universally freedom advocates and crypto-nerds. After it started to catch on a bit, the first speculators started to invest. Though freedom advocates were hopeful, there wasn’t much real-world utility just yet (simply peer-to-peer people exchanges) and most transactions occurred within the bubble of the cryptoverse.

At some point, some merchants began to accept cryptocurrencies and utility began to expand. As the value of cryptocurrencies rose though, a massive amount of speculative investment was injected. And of course, we all know what happened at the end of 2017 where Bitcoin’s price (Bitcoin, beyond all others, hogged the news), and even more dramatically, Dash’s price mooned to all-time highs. At that moment a bubble had formed and FOMOs jumped in (mainstreet speculators) further driving the prices up.

The bubble popped after a critical mass of people leapt on the boat and then collectively said, “Now what?”

“Cue the Naysayers!” was the title of the article I wrote addressing the blowback of negative publicity and sentiment (t0dd). But the article only briefly touched upon the chicken-and-egg problem we have with cryptocurrencies. Let’s expand on that a bit more…

You see, crypto has a chicken and egg problem. Crypto has value, but it is primarily speculative and the market is small, and therefore very volatile. To enhance utility, it needs to be more *useful* as a currency. I.e., Merchants need to accept it. But merchants don’t want to accept a currency without there being a larger market that will spend it. Therefore, without everyday utility, the crypto remains small and volatile and thus the cycle perpetuates. Chicken meet egg. 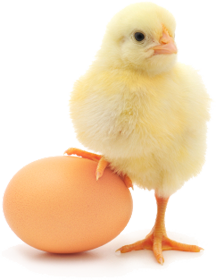 But that cycle can be broken in any number of ways.

One way could be to mirror the fiat model: Force everyone to accept it. But that is not going to happen. Let’s dismiss this out of hand.

Another model could be where adoption of the new technology is perceived as clearly superior to currently available options. A couple examples could include (1) a failing economy or (2) a market of unbanked or unbankable individuals.

And then there is what I will call the *Organic Growth Through Persistence* model. Where the technology first establishes a foothold with early-adopting vendors and merchants seeking to offer products and services to meet pent-up demand and then persists *long enough* to penetrate early mainstream markets.

Model 1: Where crypto is an obviously better alternative

In a recent *3-Amigos* Google Hangout, Joël brought forth the interesting point that mass utility may be led by the 2nd and 3rd worlds and may even contribute to a prosperity inversion (Dash Force News). This is something I have been contemplating for some time, and I tend to agree with his observation.

For example, Venezuela used to be a rather prosperous country. All it took was a few years of utter mismanagement and an over-reliance on a single resource (oil) for the economy to enter a tailspin (“Crisis”). Now, cryptocurrencies can’t fix ailing leadership, but they can reign in a failing currency. Or more precisely, crypto can replace a failing currency with a currency that has value retention, and in the process leapfrog 1st world nations in the adoption of this new technology. Even fairly extreme volatility in cryptocurrency valuation is more attractive than the local fiat currency.

This pattern may propel crypto into the mainstream, making those regions leaders of the adoption wave, reducing the volatility, and therefore increasing general utility. And with increased utility, cryptocurrencies would become more attractive to markets in regions with more volatility sensitive stable economies.

Venezuela is today seeing a relatively rapid adoption of not just crypto, but Dash in particular (Szilard). But even if an economy is not distressed, recent memory of economic struggles could be a catalyst. Ghana, for example, went through a lot of turmoil in the past (and is also overly dependent on oil coincidentally). Today, Ghana is one of the fastest growing economies in the world, but Dash has still made quite an imprint there and will hopefully grow in partnership with that economy.

While communities saddled with distressed economies may carve out their niche, that doesn’t mean crypto can’t grab hold of the 1st world as well. These markets are simply more sensitive to a number of factors associated with this immature technology: regulatory manipulation, volatility, ease of use issues, etc. In the end, in order to grab and retain a foothold in the 1st world, crypto has to be relatively simple to use for both the customer and the merchant (and supply chains). It first has to be *simple enough* to motivate early adopters who then seed the market. At some point, assuming growth and ease of use efforts continue and the existing market remains vibrant and saturated, the “chasm will be crossed” into the early mainstream market. I.e., There exists an adoption chasm that is especially difficult to cross between “Early Adopters” and “Early Majority” markets (Moore). 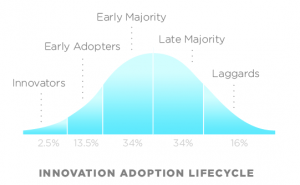 An interesting aspect of the adoption lifecycle curve is that often the products and services that succeed are the ones that can simply stay the course. Cryptocurrencies aren’t really “owned” by anyone. If adoption is rapid or takes years, there is no company that may run out of runway. Mind you, some currencies may wane where others wax, but the entire space can persist. Cryptocurrencies can “wait out” the early awkward years.

And that wait may be longer. The financial products in the 1st world generally “just work.” Cryptocurrencies are a harder sell in these markets because there is no desperate need for the improvements that they bring.

Persistence is an important mechanism, but in order to facilitate smooth movement along the curve, technological progress still needs to continue. There is still a lot of required effort needed for the ease of use front in particular. Cryptocurrencies have to be stupid simple for consumers to manage their funds without being terrified of losing them. And point of sale systems have to be simple to implement —ideally available by default— with options for merchants to manage fund conversion into fiat (or whatever they want) and ability to manage any tax implications.

The Dash development effort fills me with optimism for that currency. Dash is spending much of its current development efforts fleshing out a decentralized API layer (DAPI) that will enable other development teams to build software that interrogates and interacts with the Dash network (Johnson). These are fundamental to enable even more rapid higher-level innovations.

It’s also important to note that not all of the 1st world enjoys a functioning banking system. The cannabis industry is a perfect example of an unbanked (or underbanked) market. Alt36 aims to solve this problem by becoming *the* point of sale solution for the banking-challenged American cannabis market. Effectively, a 1st world market with 3rd world problems.

Other industries have seen similar success in both dealing with the chicken and the egg problem and crossing the chasm. The first example that comes to mind is the electric car industry. Not many people realize it, but the first electric cars were invented in the 1880s. But the innovation was way WAY ahead of its time. The technological innovation needed to make such vehicles viable was simply nowhere on the horizon. It would take over a hundred years to develop something compelling.

2008 was the year that electric vehicles started to take off. But there was a problem: No power-up stations were available for the vehicles that no one was buying yet. So, how was this resolved? Through a combination of forces: (1) the introduction of hybrid vehicles, (2) seeding the market first with urban commute vehicles, (3) massive government incentive programs, and (4) continued significant technical advances.

The first vehicles (hybrid and short commute vehicles) were *good enough* to seed the early adopter market. Massive investment and significant technological advances then helped address the more mainstream market by making electric cars more “normal”, even “luxurious”, and assisted in building out the power-up infrastructure. Combined those innovations with governmental investment and the bridge between early adoption and the mainstream was built. Today the momentum for electric vehicles has finally hit a critical threshold pushing demand over a tipping point. Our future is undeniably electric! It’s now trivial to envision a world without dinosaur-fueled vehicles (to co-opt Mark Mason’s phrase).

In the beginning, many crypto-advocates viewed adoption through rose-colored glasses. I think many of us thought that the market would just naturally grow and people would simply adopt it because it is better. But that viewpoint has proven to be naive. In the end, solutions to problems are what drive revolutionary change. And those solutions have to be easy to adopt (clearly superior user experiences).

I am now increasingly convinced that underserved people in the 2nd and 3rd world are going to lead this technological advancement. They are going to stabilize the currencies and increase their real-world use. Their needs will also drive development of missing solutions for consumers, merchants, and supply chains.

Citizens of the 1st world will also be beneficiaries. As currencies stabilize, they will become more attractive to the mainstream *as currencies* and not just speculative instruments. This should lead to a groundswell of adoption that encourages more merchants to enter the market.

I respect Draper’s optimism. But truthfully, I don’t know that anyone can really predict how this is going to play out. Recent events and efforts, though, indicate a bright future. A bright future that just may be led by our compatriots living in unexpected corners of the market. Regardless, the next five years will certainly be an exciting time for all of us.