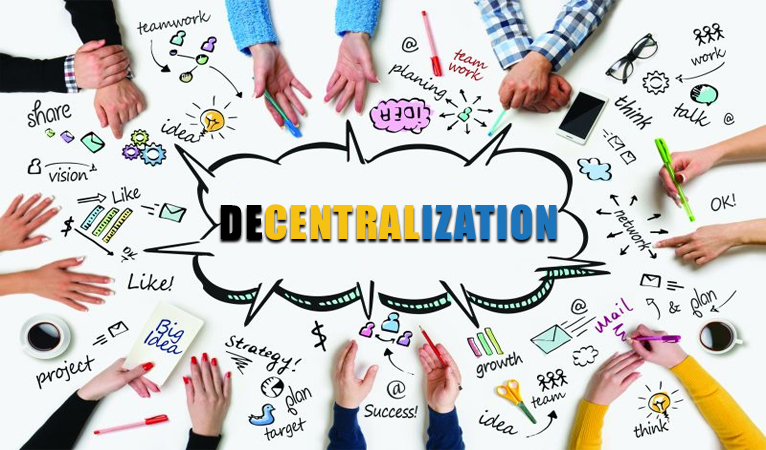 What’s one word you can throw around that’s sure to give you some cryptocurrency cred? Decentralization. In fact, the highest praise you can give a cryptocurrency project is that it’s “decentralized,” and the worst insult is that it’s “centralized.” The word decentralized conjures up images of a hoard of volunteers working hard, resolving their disputes amicably, and coming together for the common good. Centralized, on the other hand, invokes images of evil elites keeping people under their thumb and ruling the world as they see fit.

The Efficiency of Centralization

Of course, reality is a bit less cartoonish. Depending on the situation, both decentralization and centralization can be good…or bad. For example, a family with young children is necessarily “centralized,” with the parents making decisions for the best of the family, without consulting the 4-year-old. Only an ideologue who’s never had kids will tell you that that form of centralization is bad. Likewise, volunteer associations might choose to have a centralized form of governance for efficiency’s sake. Consider the local youth baseball league. It would be a disaster if every parent were to have a say in every decision of the league. Instead, usually a few parents are elected to sit on the league’s board and make most of the decisions on behalf of all involved.

Centralization can also be beneficial in business organizations. A successful business does not engage the entire employee base when making decisions. Most employees are not qualified to know what is best for the future of the company. So a CEO or President makes most of the major decisions, and bears the consequences of good or bad decisions.

The Dangers of Centralization

In all of these cases, there is nothing wrong with centralization. But that doesn’t mean centralization is always the best solution. As we move away from considering families, community groups, and businesses, and instead look at larger, less-volunteer-based organizations (think governments), centralization’s dangers begin to outweigh its benefits. Power is concentrated in a small number of individuals over a large mass of people, often without the majority’s consent. These individuals make all important decisions, and accrue all power to themselves. Such situations are ripe for corruption and abuse. We see that clearly in the history of government-backed currency, in which a small handful of powerful men and women arbitrarily control the flow (and therefore value) of money in a society.

What does this have to do with cryptocurrencies in general, and Dash in particular? It is a reminder that, while decentralization can be a force for good, it is not a magic bullet that solves every problem. Through the Masternode network and the Dash Budget System, control of the overall Dash network is decentralized, as it should be. Big-picture decisions regarding the direction of Dash are considered and voted on by a diverse network of invested owners, with no one person or group able to control those decisions. Yet within the Dash ecosystem there are small, centralized groups which build and promote Dash.

For example, the running of the various teams within the broader Dash Core Team are internally centralized. A front-end developer does not make business development decisions, nor does someone involved in public relations make technical decisions. Instead, each team has a competency which it focuses on and directs. Each has a team leader who shapes the direction of that team.

Likewise, other Dash-funded teams are internally centralized, including Dash Force News itself. The articles that are published and the videos that are produced (as well as all the other work) are not determined by a vote of the community. Instead, a small team makes those decisions and moves forward with them. Yet the very existence (via funding) of Dash Force is determined by the decentralized Dash Budget System.

In the crypto world, there is no greater epithet than calling something centralized. Yet decentralization and centralization are more complex concepts than many cryptocurrency advocates seem to think. While there are certain things that should definitely not be centralized (such as the overall control and direction of a project), there are times when being centralized is fine. Let’s not create a boogeyman where one doesn’t exist.