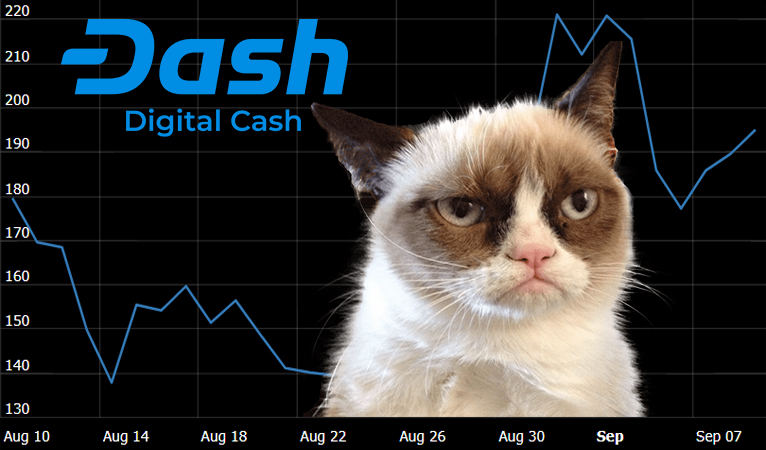 I would like to take this week’s piece to address some of Dash’s critics. There have been several hit pieces in major cryptocurrency publications such as Bitcoin Magazine and Bitcoin.com recently (I won’t provide links, you can find them yourself). To them, I’d like to say something that might be surprising: “You’re on to something.” Yes, Dash’s haters have uncovered something pretty huge that has been a secret largely unknown outside of the Dash community.

No one notices abject losers

Put bluntly, few waste their time kicking around losing projects for the simple fact that no one notices them. How many coins out of the top 100 market cap rankings get any kind of meaningful hate? Out of the top 50, even? Very few get even noticed enough for the average crypto pundit to form an opinion. Negative attention is a sign of attention, and attention is a sign of prominence, which does not necessarily indicate success, but the two tend to be correlated. If you’re getting hate, it doesn’t necessarily mean you’re doing something right, but it does mean that you’re doing something.

Even traditional agnostics are piling on now

One of the more surprising aspects of the recent batch of Dash critics is that some of them come from entirely new directions. It’s perfectly normal for a Bitcoin maximalist, Litecoin fan, or (particularly) Monero lover to want to start a rivalry with Dash. Recently, though, Bitcoin Cash advocates have piped up as well.

Most crypto governance models are guaranteed to produce mediocre results at best or fail in the long run because they ignore the economic calculation problem.

Ex. Dash uses economic planning instead of market-based resource allocation. Will always be worse than others.

This is particularly interesting since most of the Bitcoin Cash narrative is rigid and narrowly focused on use case for commerce, which Bitcoin is the true Bitcoin, and why Blockstream destroyed the original Bitcoin, which will never work for real use cases. To hear Dash mentioned, particularly out of the previous context, is truly a new development. They must have noticed something special about it.

There is no more denying that Dash has been dominating adoption

So why the sudden surge of negative attention? Because Dash has been doing exceptionally well at being used in a field where few others are at the moment. After the great fee and confirmation time surge of late 2017, most of Bitcoin’s hard-earned adoption dried away, with Litecoin suffering the same fate, both waiting for an off-chain scaling solution that may never truly work as well as regular transactions. Bitcoin Cash still wages the great scaling war that most of the cryptoverse would likely prefer to put behind them, and is experiencing internal strife of its own. More importantly, though, the market has fallen dramatically, taking the hype out of most projects and keeping down the energy necessary to push for adoption. In general, it doesn’t look good for cryptocurrency adoption.

Dash, on the other hand, has been making heavy adoption strides even in the middle of the bear market. At the end of November there were 500 known Dash-accepting businesses listed on DiscoverDash. Today there are three times that number in Venezuela alone, six times that globally. Transaction data shows Dash bucking the downward trend and increasingly being used for real-world purchases. And media attention has at last begun to follow.

For people who have been involved with Dash for some time, this development has been a long time in coming. For those outside, however, this comes as a major surprise, especially those who had written Dash off a long time ago. Now the critics know.

The tone of criticism is getting a hint of defeat

The best part? The flavor of the criticisms has taken on a tone more approaching complaining than attacking.

Does anyone really care about $DASH news, other then #DASH hodlers?

Less money on marketing, more on development is probably a wiser idea.

They are making the same mistake as #Bcash and every other altcoin.

One does not a currency become, through marketing.

Your opponents kick you when you’re down. When you’re doing well, they try to diminish or protest your successes. When criticisms start to pile up about all the attention garnered by the success of the Dash community’s tireless work, it becomes a strong sign of victory.

Your friends always speak highly of you no matter how well you’re doing. When your enemies are forced to hint at your successes, that’s how you know you’ve accomplished something real. To all Dash’s haters: Cheers, and keep watching!