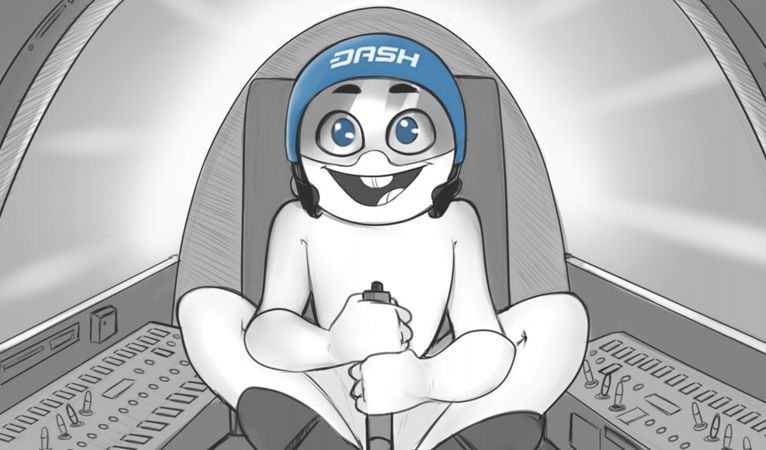 I admit I don’t know much about advertising strategy and don’t like watching commercials.  But they are a fact of life in many forms of media. YouTube is famous for making us wait 5 seconds to see “Skip Ad” to get to the video we want. If I have not seen the commercial 100 times I usually sort of pay attention to that first 5 seconds which makes it a good advertising venue.

A team from Cape Town South Africa is working to deliver Dash commercials to people searching for cryptocurrency terms.  That important first 5 seconds shows the main attributes of Dash.  Instant and private transactions which make Dash better than Bitcoin.  If only they worked in cheaper.

The same team has had a second proposal approved.

This is just the wireframe storyboard version of the new video as they are still working on the animation.

There were a lot of questions and comments in the discussions about Dash advertising on YouTube and what the message should be.  Pieter sums up their reasons for the campaign they proposed as follows:

Reasons for advertising on YouTube  It is incredibly cheap for the amount of exposure it gives, compared to other traditional forms of advertising. 1000 Views costs $50.
Cryptocurrency video blogs in general fail to reach large audiences. “The Cryptoverse” is one of the best out there, and has been sponsored by DASH before. It gets mostly less than 5000 views per video, and it is probably always the same subscribers that watch. Most video blogs that cover non-Bitcoin cryptocurrencies may have one or two videos that break out of the sub 5000 view range, but I have yet to see one that reached 50000 views. Even the best Bitcoin-only vlogs rarely get out of that range.

Who should our target audience be? There has been some misunderstanding that we are targeting the general public. We do not think it would be wise to spend advertising money on ads targeting people who are uninformed about cryptocurrencies before Evolution is released. For the moment we are competing within the cryptocurrency market for market share. Fortunately YouTube allows us to target our audience with surgical precision. We will target only cryptocurrency users with this particular ad.

The content targeting:  We wanted to reach Bitcoin users, especially people who are new to Bitcoin, since the ad compares Dash to Bitcoin. The ad would not have meaning to people without that context.

Should we do comparative advertising? (AKA bashing Bitcoin?)  Dash is the only viable competition to Bitcoin, and I believe it is for that reason that some Bitcoin maximalists hate it with such rancor. Dash has little to lose by “bashing” Bitcoin in a manner that is truthful and funny. Our ad is truthful, since it only implies that Dash is better than Bitcoin as far as transaction speed and privacy are concerned.

Creative decisions we made with the ad.  There has been concerns that the ad looks “cheesy” and retro. These were conscious decisions, in order to make the ad funny.  Let me explain.

The ad starts out as a Bitcoin ad. Bitcoin is golden and shiny and, yes, the ad is retro and cheesy. Even small detail like the lens flares and soundtrack are designed to contribute to the cheesiness of the Bitcoin commercial. And then it is crushed by Dash. The last thing that happens is that the Bitcoin logo falls over. The 2D part of the ad sheds all the cheesiness for a sleek modern look, ramming home the message: “Dash is digital cash.”
————————–

I followed up with Pieter to get clarification on several points from their proposals.

Can you help me understand how content targeting works – do you pick specific keywords / phrases?

Yes we pick the keywords. We are testing a lot of keywords,  and many of them give zero results. (“How to Etherium” is one example) The most interesting development is “UASF”  which we only added about 10 days ago. There is obviously a lot of interest, although the interaction rate is only 14.54%. 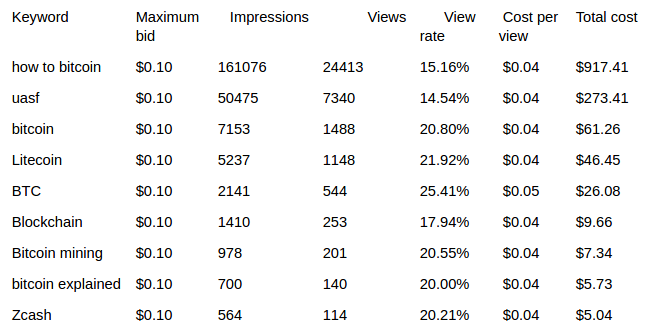 What is the logic for $50 / week in actual ad cost?
We decided on $50 a week because it was our first proposal;  we were unknown to the Dash community and did not want to start with too high a bid. We regard the first ad as proof of concept. Also, 1,000 views per day was a nice round number to start at. Our second proposal is for $500, (10,000 views per day). We decided on that figure because we had proven the concept with the first ad, had built a reputation, and lastly, because the community encouraged us to allocate a higher distribution budget. We ran a poll with our pre-proposal, and the 10,000 view budget won by a large majority.

I see you are from Cape Town SA?
Yes, both Thomas and Pieter grew up in Cape Town and  have been friends for years. Cape Town is a great city with skilled artists and a dense advertising industry. We have already subcontracted several for the current project!

How did you get started in Crypto?It was bielie who researched crypto in-depth on YouTube. That was the door to the rabbit hole. Before long, everyone at Eralith was checking the value of Dash on a daily basis, and the groundwork for what would eventually be Eralith’s first Dash commercial was being laid out. Today we are heavily invested in Dash and the Dash community.

Tell me something about your team.
Pieter has the hands-on experience in the advertising industry, and Thomas is our rising star animator. Charl is an auditor with >30 years of business experience. He handles the business, legal and tax side of the equation. Bielie has been spearheading the entire process so far. He had all the know-how that we needed when we launched Eralith.

Did you find any surprising advertising results?
Mainly the demographics: A very high percentage from India (around 30%), and a low percentage of women (around 10%). Our hypothesis was that new Bitcoin users represented the biggest potential audience on YouTube. The keyword: “how to Bitcoin” indeed proved to be very effective.

What will the analytics mean for your future projects?
Our current project will be translated into Hindi and Spanish. As soon as Evolution is ready we will start targeting mainstream audiences, and taking on Visa and Western Union directly. We will make sure that our ads appeal more to women as well!

How do these YouTube marketing campaigns fit in with the Open Letter From Evan and Ryan Regarding Dash Marketing?  To quote from that letter:
…
Here are the areas we feel marketing aligns most closely with our goals:
General awareness: Industry events and trade shows, general branding, and communicating our vision and mission to general audiences
Features: Many digital currency users are unaware of Dash’s features and benefits. Increasing awareness of our instant payments and low transaction fees are examples of messages that can increase awareness for what makes our product unique.
…

I think these campaigns focus on exactly the message Evan and Ryan see as important.  Brand awareness for Dash especially among those that have some basic knowledge of crypto and the unique features that make Dash a cut above other options.