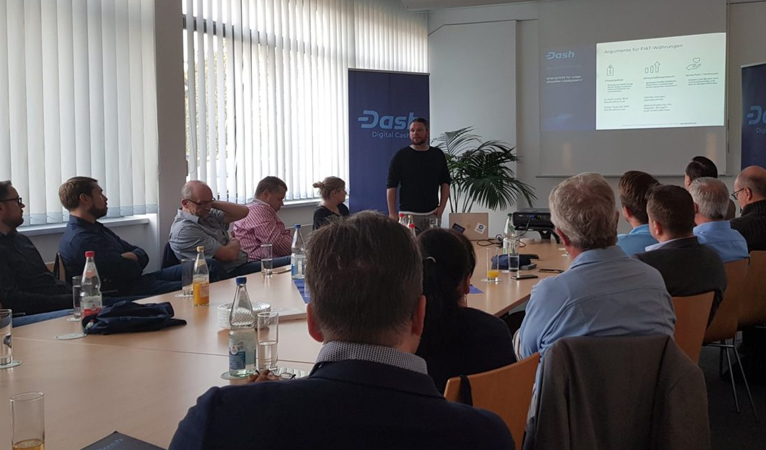 Dash Embassy D-A-CH recently has been able to increase Dash awareness in German-speaking Europe with continuation of its roadshow and crypto ATMs.

Dash Embassy D-A-CH started their roadshow series on July 23, 2018 and have attracted over 200 attendees across 5 tour stops at universities, industry organizations and coworking spaces and their most recent stop was at the Blockchain Hotel in Essen, Germany. Dash Embassy D-A-CH told DFN that most attendees are more interested in trading than using Dash in everyday life, and thus they find the tax information part to be the most interesting. However, Dash Embassy D-A-CH said that “even though there is not a big problem with the Euro at the moment, people start thinking about the money system and Dash is the eye opener for them”. Dash Embassy D-A-CH then further explains to attendees that the volatility decreases as more merchants and consumers start using Dash in everyday life and how Dash is able to fund its own adoption campaigns.

“One thing every attendee is impressed of is the DAO structure, the treasury system and the projects and DFOs we have all around the globe including the services we offer with Dash Embassy D-A-CH. People like the possibility to get in contact with a cryptocurrency directly without running through all the communities and forums”

Then it was recently announced that 40 multi-coin, including Dash, ATMs will be launched in German-speaking Europe. Dash Embassy D-A-CH emphasized that the ATM provider already intended to integrate Dash so they are not responsible for the integration, but will make “sure that Dash will be promoted on the Top-Screen and are supporting them by finding locations for their ATMs, so they can promote Dash next to the machines”. The current plan is to launch the ATMs by the end of the year and will try to place them “into Dash accepting merchants, so the merchants can handle customer service and support”, Dash Embassy D-A-CH said.

The team at Dash Embassy D-A-CH have been able to spread awareness of Dash by leveraging these events to find and energize early adopters. They highlighted that while everyday users might be limited, of the merchants that do integrate Dash, they “deliver value to the network by being a platform and educator for their customers so they will help us to succeed on the long run”. They also mentioned that merchants that operate in international markets have been the biggest sector adopters of Dash and the team plans to focus on this sector more in the future. They are also planning to increase adoption with a push for individuals sending remittances back to Turkey, which is seeing increasingly unstable economic conditions. They will start by talking with some of the major cryptocurrency exchanges in Turkey at the Blockchain TR Summit in Ankara in November.

The Dash Embassy D-A-CH then plans to create a “complete Dash ecosystem” located across German-speaking Europe with the ATMs.

“People will be able to get Dash in the way they already know from getting Cash and they will be able to spend it directly at the merchant. We hope this will help people to understand, that Dash can be used as a currency instead of a digital investment vehicle.”

They also added that even if consumers do not buy or use Dash from the ATMs, Dash will still have a greater renaissance than it did previously. The team is working hard to find individuals that will use Dash in almost any capacity to increase Dash usage and awareness.

Cryptocurrency is still a niche subject since many outside the cryptocurrency ecosystem have very limited knowledge of the topic. Then learning more about cryptocurrency is difficult since consumers have to sift through forums and blogs, which are often cluttered with inside jokes and high-level discussions. Dash helps solve this problem by reaching out to find the marginal consumers likely to adopt Dash and cryptocurrency and gives them all the relevant information that they desire. Dash Documents is one of the best examples of an easily digestible repository of detailed information on how Dash works, which makes the adoption process easier and lowers the switching costs from the old financial system. As the Dash Embassy team mentioned, many in the first world are more interested in trading than spending Dash, but it is nevertheless a step forward as Dash is introduced to more potential users, educates consumers on how Dash is unique, and works towards achieving more adoption by word of mouth.