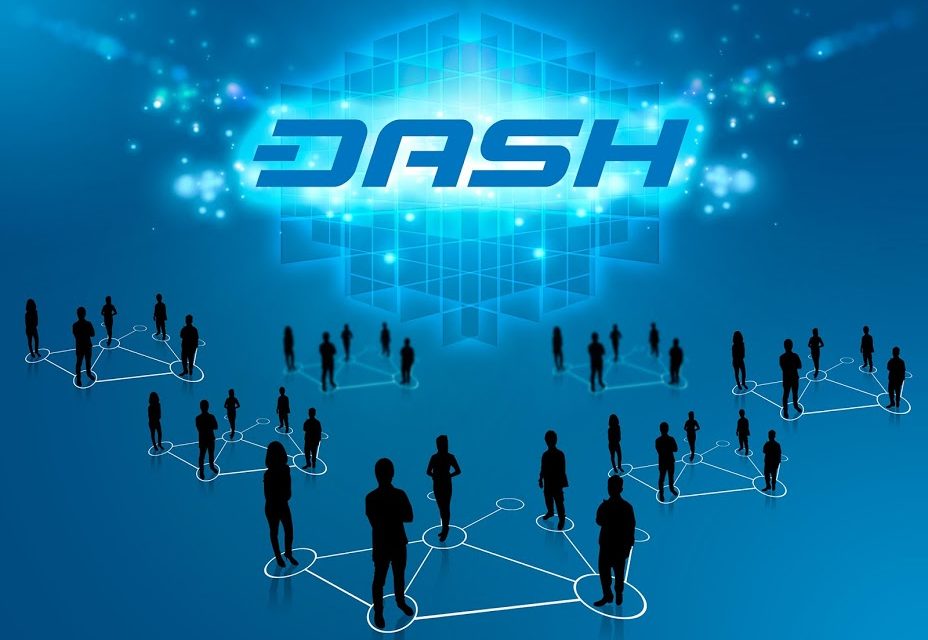 Dash is a pioneer in decentralized governance, running a fully-functioning decentralized autonomous organization, or DAO. This DAO is governed by masternodes, stakeholders who receive funding from Dash’s block reward in exchange for helping to run the network and voting on budget proposals. For years the masternodes have voted on proposals from the Core team, as well as dozens of other smaller contractors seeking to work in the greater Dash ecosystem.

Now, however, Dash is experiencing some new challenges: the DAO has grown large. What was once a simple task to oversee Core’s proposals and those of the community has now become more involved. As such, now is a great time for a thought exercise on how Dash’s DAO can effectively scale to efficiently support long-term growth.

The entire reason we’re even talking about any of this is because Dash has become successful. What started primarily as a funding mechanism for Dash Core development proposals grew to include the occasional community project. It was a fairly simple task for masternode owners to go over Core’s proposals, check out a couple community proposals, and be done with it. It was also easy for anyone to submit a proposal for the cost of dinner for two.

Now, due to the meteoric price surge experienced recently, Dash’s operating budget has grown exponentially, putting strains on the previous setup. In addition to the ever-expanding and more intricate Core budget, the number of parties vying for the remnant of the monthly budget has exploded, leaving masternode owners to sift through a veritable plethora of proposals. Additionally, the proposal fee of five Dash is now approaching what some people pay in rent, significantly increasing the risk and effort for smaller applicants.

But have no fear. This system can scale beautifully without changing a single line of code. Here’s a quick thought exercise on what that might look like. 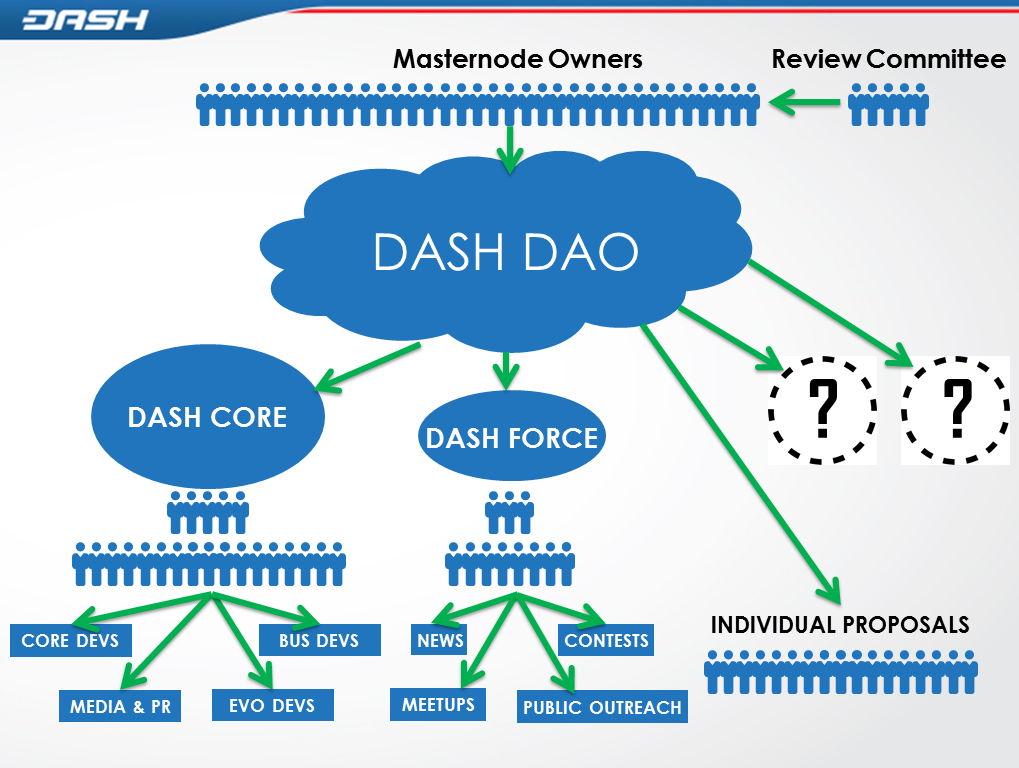 Previously, under the DAO there was the Dash Core team employing a group of people for the development and basic structure around the coin, as well as a few independent proposals and contractors, usually minor and one-off (with a notable exception being the killer YouTube show Dash: Detailed). Now, there are two separate groups under the greater Dash DAO: Dash Core and the Dash Force, each with its own staff, funding, and objectives. Much of the work required to grow the network already flows through those two groups, rather than through dozens of individual proposals.

What we can imagine that, in a future where Dash grows even more, there would be a similar model, only expanded. More sub-DAO organizations will join the ecosystem, performing other functions not currently covered by Core or the Dash Force. Most of masternode attention will focus on these groups, and most of the projects done for Dash will be attached to them. Only a minority of projects will need to be submitted outside of the scope of existing initiatives.

Additionally, an independent review committee, made up of masternode owners, would save some of the workload from the rest of their colleagues by digging through all current proposals and giving an official recommendation. 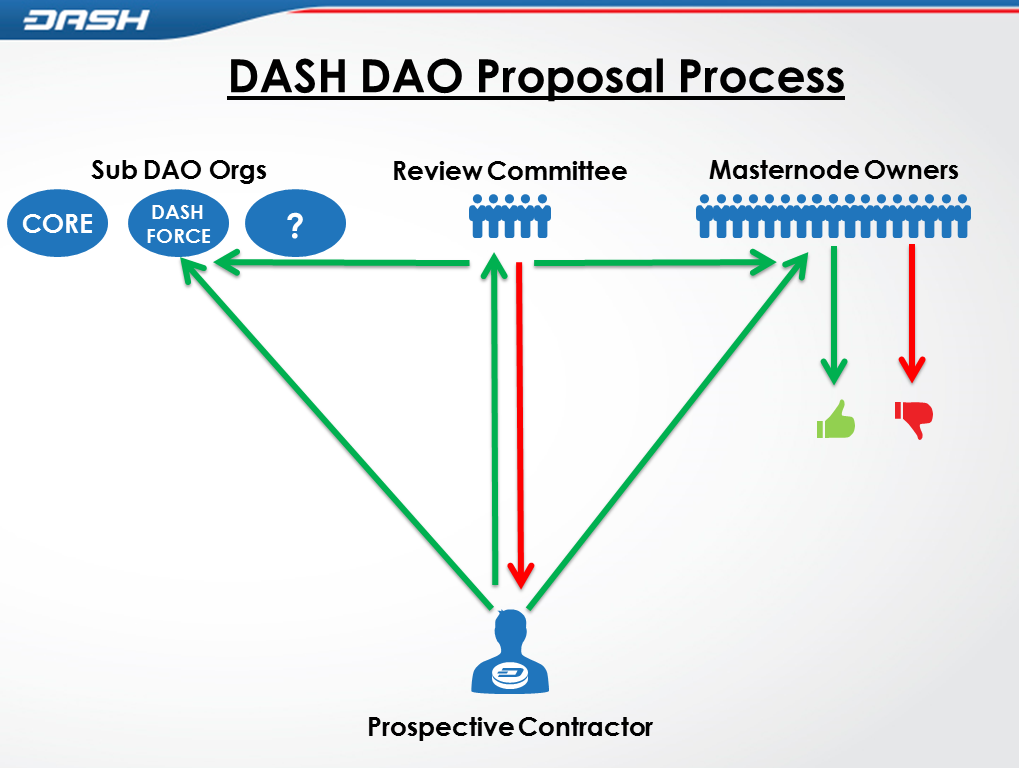 The streamlined process of onboarding new contractors to the Dash DAO could be as follows: The contractor would first approach the sub-DAO organizations to see if they’re hiring, or pitch an idea to them. If they’re either all full up or the project falls outside the scope of their goals, it can then be submitted to the review committee. The committee would then review the proposal, make recommendations, and help the contractor fine-tune the details, or recommend an appropriate sub-DAO group. The proposal then either gets absorbed into a group, passes to the masternodes for a vote with the committee’s recommendation, doesn’t receive a recommendation and is taken back to the drawing board, or receives no recommendation but decides to press on for a vote anyway.

Remember: contractors can still join the DAO the “old school” way. Anyone is free to get together the fee and submit a proposal straight to the masternodes without consulting the review committee, and I’m sure some still will. This mechanism simply gives an option for both contractors and masternode owners to make their experience more fruitful and efficient.

In all this we have to remember to remember that Dash’s extremely simple governance system already works. The right people are incentivized and empowered to make the right decisions, and the simplicity of the governance mechanism allows room for growth in a wide variety of directions. We should resist the urge to over-code and over-formalize the entire process. Yes, planning and thought exercises such as this are important to crafting the future, but in the end the community will simply act in its best interests.

That’s the beauty of the Dash DAO: it’s not just a technology, it’s a community, a living breathing organism tied together under a loose framework of code. Rather than a stagnant tech or group, Dash becomes a vehicle that can grow to include the hopes and dreams of whoever chooses to participate. The thousands of individual participants and separate decisions link together to form one greater product.

Welcome to the future. Welcome to a true, thriving, decentralized autonomous organization.