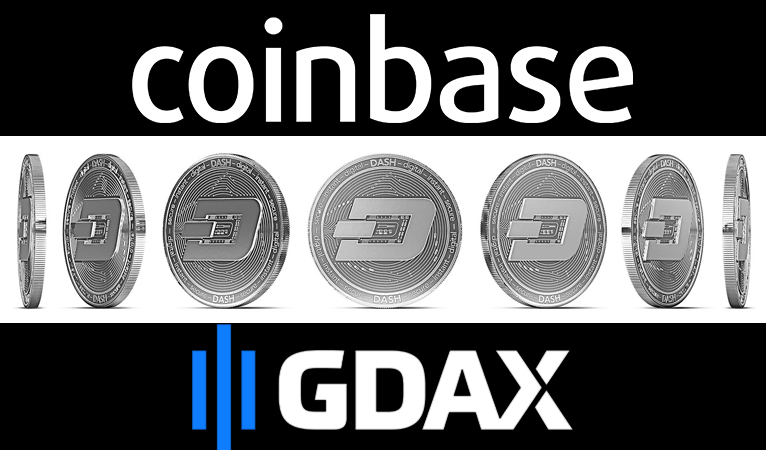 Dash is a top ranking currency. It consistently ranks in the top 5 (by market cap) among currencies (versus securities, utility tokens, and other non-currency assets). It is also one of the most widely available via exchange. In the USA you can exchange it on Poloniex, Kraken, and Uphold. Oddly though, you can’t exchange Dash on Gemini, nor can you on Coinbase which is by far the largest of US exchanges.

Coinbase and Gemini have taken a decidedly more deliberate and cautious stance when it comes to adding crypto-currencies to their trading portfolios. This is partially due to the nature of their founders (originally Bitcoin maximalists) and the focus of their businesses (trade only a few; Bitcoin first and foremost). Whereas Coinbase has added four cryptocurrencies thus far (Bitcoin, Ethereum, Bitcoin Cash, and Litecoin), Gemini supports merely two, Bitcoin and Ethereum.

It doesn’t look like Gemini will be adding more currencies or other assets any time soon. Or at least, if they will, they have been fairly quiet about it. Coinbase, on the other hand, has announced an intention to slowly add other currencies. But given that the rollout of Bitcoin Cash was a complete fiasco and rather controversial, to say the least, Coinbase now seems to be taking an even more tentative approach and has enacted a more formal process for the evaluation of future currencies. The cornerstone of that process is publicly accessible. They call it the GDAX Digital Asset Framework.

Coinbase is the largest, most important, exchange in the United States. Including Dash would be beneficial to both Dash and Coinbase’s customer base. Since Coinbase has come out with a more empirical process, I decided to examine Dash in the context of their standard of acceptance. As you will see below, Dash more than meets their requirements, and considering Dash’s role in the world of cryptocurrencies, I contend it is the most obvious “next coin” to add.

It makes sense for Coinbase to offer Dash as one of its premier tradable currencies.

Coinbase effectively evaluates based on…

When viewed through this lens, Dash is a prime candidate for Coinbase to add as a supported tradable asset. Just to touch on a sampling of how Dash addresses these criteria, let me respond in the order given above.

Getting into the weeds a bit, I have transcribed nearly the entire Coinbase evaluation framework. I will respond inline using a more narrative discussion format…

1.0 GDAX MISSION & VALUES
Does the asset align with our mission and values?

1.1 Open Financial System – Open financial system is defined as being available to everyone and not controlled by a single entity.

Dash has established so many firsts in the crypto-space that it is challenging to list them all, but here is a sampling of them: on-chain fungibility improvements, instant payment execution, decentralized governance, self-funding (treasury) …all empowered by a crypto-first: the layer-two Masternode network. Dark Gravity Wave improved and smoothed out difficulty adjustments. Dash established the first, and perhaps only lastingly successful DAO (Decentralized Autonomous Organization). A thorough overview of the breadth of Dash’s past innovations and current feature set can be found here.

Additionally, the development team is hard at work adding significant and first-of-its-kind ease-of-use features, a decentralized API, and a model for the development of decentralized applications (DAPPs). Not only is this technology accessible to use by anyone with a smartphone or access to the internet, it aims to be the easiest cryptocurrency technology to use by anyone. Full stop. And all these features? Utterly decentralized, permissionless, trustless with nothing dependent on a centralized service or single entity.

Assessment of the asset and network.

The Dash Project is driven, after Bitcoin and Ethereum, with arguably the most robust and active community. Part of that success can be credited to Dash’s openness and transparency. Dash has committed to keeping all code open source. Dash’s zealous dedication to openness has been recently demonstrated when the Dash DAO filed its first defensive patent. Dash is committed to ensuring its patents are used to drive a positive trend in the entire crypto-space and not be a restriction.

As for peer-review, the very nature of Dash being a four-year-old leading open source project has had the beneficial effect of ensuring that Dash’s codebase receives constant exercise and review.

The network has also partnered with Arizona State University for ongoing research into protocol improvements in efficiency and scaling. There have also been a number of explicit investigations into Dash’s design and execution. The author, at this time, does not have a broad list of examples, but here are a couple: (1) Charles Hoskinson’s IOHK team investigated Dash’s Treasury/Governance model, results, response, and (2) PrivateSend analysis was performed by Kristov Atlas, brief results, full analysis, response.

Additionally, there is an active bug bounty program. Read more about it here. One prominent bug bounty success was the discovery of a critical edge-case exploit in the InstantSend code.

Other 3rd party entities, like Arizona State University, are actively analyzing the code and looking for deficiencies and optimizations. In fact, I think the partnership with Arizona State University is not talked about often enough. Dash is sponsoring a scholarship program that seeks to seed both knowledge and research surrounding blockchain technologies with an emphasis on Dash.

The founder of Dash (Evan Duffield) has handed off leadership of ongoing Dash code development to the Dash Core Group (a legal entity governed and funded by the Dash DAO and blockchain). This transition has been smooth, has distributed power throughout the community, and has lead to skyrocketing development momentum. The breadth of innovations listed above and the most recent demo by the Dash Evolution effort, many of which are industry firsts, gives a hint of what is yet to come. There are really few other teams comparable.

Business and Operations: The aforementioned Dash DAO may be the only one of its kind in the crypto-space. The Dash Project is entirely self-funded. Dash Core Group, which receives the single greatest allocation, operates judiciously and manages its funds transparently as demonstrated by per-quarter reports and live QnA with the Dash community. They manage their funds in an escrow and budget accordingly… especially considering the volatility of the market.

I almost skipped over this section in Coinbase’s assessment because when folks in the crypto-space trot out an example of a model project that does governance right, Dash is almost always the example used. But sometimes I forget that readers may be new to Dash and the crypto-world in general.

It could be argued that Dash’s governance model is seen as its most significant differentiator in the crypto-space. What do I mean? Evan Duffield, the founder of Dash, wanted the network to ultimately be able to govern itself. This is enabled by the layer-two Masternode network. It has three functions: (1) enable on-chain additional functionality like InstantSend, PrivateSend, DAPI/DAPP etc., (2) fund projects and development, (3) vote on future direction and nearly anything that might improve the product or community. A great place to see current and historical proposals is the Dash Watch and DashVoteTracker websites. A fuller description of Dash’s governance model can be found here.

White papers. Even though Coinbase suggests a white paper is not required, please browse to this page for a set of white papers outlining various aspects of the project. Additional detail can be found on that site and https://dash-docs.github.io/.

2.4 Scalability – Assessment of a network’s potential barriers to scaling and ability to grow and handle user adoption.

The current Dash roadmap is in communicative flux, but will soon be updated. It can be found here. An ambitious scaling plan has also been proposed. In the meantime, in anticipation of the inevitable, a pre-emptive block increase to 2MB was decided by the network —decided within 24 hours because… Dash Governance works.

Dash is not a security. Plain and simple. The driving objective is for Dash to function as a payments network with a robust toolchain to enable development of decentralized applications. Though people fling around words like “investment” fairly casually, Dash is optimizing to be a well-functioning, performant money. A currency. And its ability to self-fund without resorting to venture capital, a central organization, or even other “invest in us and see what happens!” statements, all attest to Dash’s commitment as a currency and payments platform. Dash Force News’ writer Eric Sammons wrote a nice article on this topic back in September of 2017.

3.2 Integrity & Reputational Risk – Would listing the asset be inconsistent with GDAX policy?

I am not a lawyer, but Dash, like Bitcoin, does not claim to be legal tender. It is a currency, but a digital, non-state currency with no “owner”. And with that comes no guarantees of price stability, return on investment, not central manipulative management.

4.0 MARKET SUPPLY
Which metrics are important to consider to limit the risk of price manipulation?

4.1 Liquidity Standards – How liquid is this asset?

Dash was originally built upon the Bitcoin codebase and thus shares many of its features, operational mechanics, etc. The differences include a 2.5 minute (average) block heartbeat and up to a 2MB block size. Block reward emission rates are smoother than Bitcoin’s due to an annual (versus every 4 year) reduction, and that reduction is not in half but by 7.14%. Also, the amount of Dash being issued per block is variable based on harsh rate difficulty, which is calculated every block based on the previous 24-hour moving averages (a more sensible reward calculation that avoids miner retargeting abuse).

More importantly, Dash is readily available from many exchanges leading to Dash being listed as a top 10 to 20 crypto-asset (by market cap and by volume) for most of its 4+ year tenure and if only considering those assets generally considered “currencies”, Dash is consistently ranked within the top 5 to 10.

4.2 Global Distribution – Where is this asset available to trade?

5.0 MARKET DEMAND
Which metrics are important for monitoring adoption or network effects?

5.1 Demand – What is driving demand for this asset and does it lead to stronger network effects?

Demand for Dash is consistently strong and readily available in many markets. The consistent market cap and volume performance have also already been discussed. The node count is variable, of course, but the current Masternode count is well over 4500 at this point. Since they are incentivized with 45% of the block reward, node longevity and uptime are particularly sticky compared to other blockchains. Wallet metrics also indicate a rather healthy distribution.

6.0 CRYPTO ECONOMICS
Assessment of how the ecosystem’s participants are incentivized to behave.

6.1 Economic Incentives – Are the economic structures designed to incentivize all parties to act in the best interest of the network?

Dash is a leader in incentive innovation. Miners, Masternodes, and the Treasury (45%, 45%, 10% incentivize stakeholders to act in the interests of the blockchain. Additionally, since there are no 3rd party venture capitalists at play, development is not beholden to conflicts of interests from outside of the network.

The inflation rate, as was mentioned previously, is exceptionally smooth and eventually caps (at an estimated 17 million to 18.5 million Dash). Dark Gravity Wave, the algorithm governing difficulty per block greatly reduces any negative incentives that disrupt other blockchains associated with miner retargeting.

6.2 Token Sale Structure – A small subset of what we believe are best practices for ICOs and indicators of the token’s future ability. If the token did not have a sale, this section is not applicable.

Section 6.2 does not apply to Dash and is only listed here for completeness.

Dash is poised to become a major factor in the success and adoption of cryptocurrencies in general and is paving the way for the inevitable wave of massive adoption. This author looks forward to the day that Dash and Coinbase clasp hands in partnership and help blaze a trail leading to a brighter future for everyone.