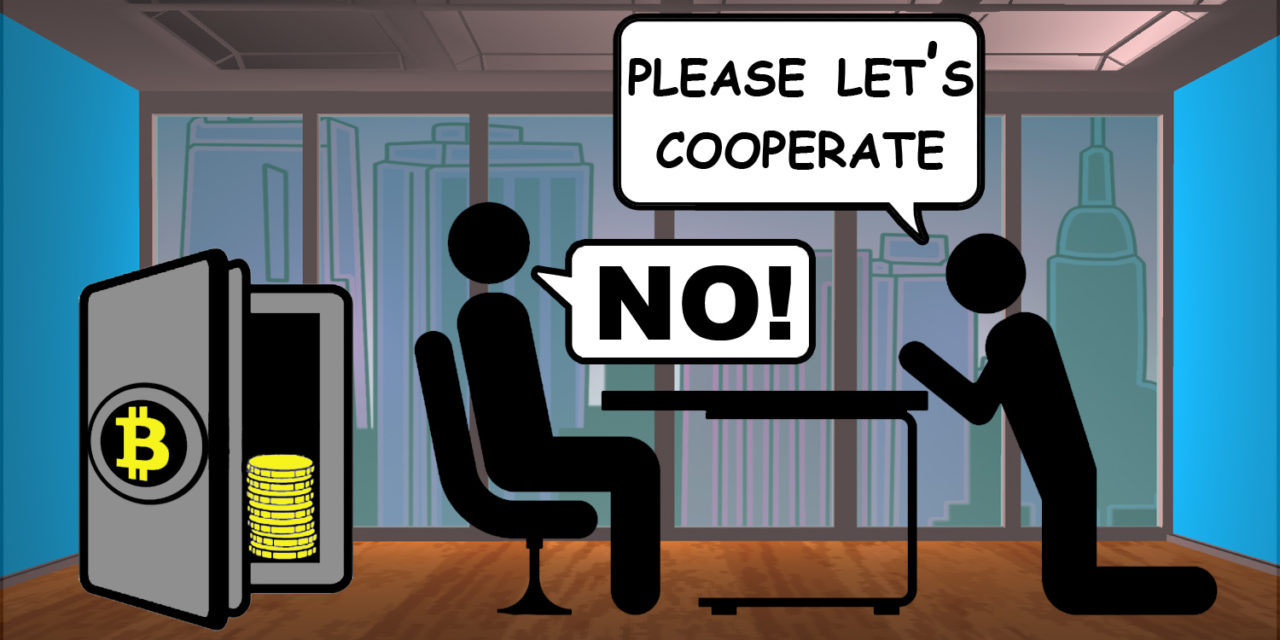 For years now, the Bitcoin community has been involved in a scaling debate, which this year reached epic proportions. Competing protocols, mining wars, and the absolute disaster that is social media all underscore one undeniable fact: Bitcoiners aren’t exactly getting along right now. It may be fair to say that at no previous point in history has Bitcoin’s community been manore divided, negative, and combative.

The “tragedy of the commons”

One of the biggest selling points of Bitcoin has ended up being its greatest liability: no one owns it. While a distributed network is a genius idea to create a censorship-proof currency that anyone can use without having central points of failure, the incentive structure of the first great cryptocurrency is a little bit skewed. To describe the block reward bluntly, miners get everything, everyone else gets nothing. Anyone can buy or use Bitcoin, and anyone can theoretically contribute to its code, but no one has ownership in Bitcoin itself. This means that you can build a whole multi-million dollar business around its technology, throw your life savings into it, yet have absolutely no say over how it’s governed. You can work tirelessly to write the best code to solve all the issues with Bitcoin, ensuring that its continuing development goes smoothly; but, at the end of the day, you aren’t paid as a developer. You only profit if you hold some Bitcoin and it goes up, the same as any casual speculator who hasn’t done a thing for the network.

The bottom line of this is that most people don’t profit from Bitcoin directly, and instead have to find other means taking care of themselves. This can include actions that may or may not be good for Bitcoin as a whole, and certainly doesn’t preclude mudslinging to advance a personal agenda. In Bitcoin, being a huge troll won’t hurt your money, and in many cases might actually make you richer.

Breakdown of Bitcoin players and incentives

To understand why there’s so much fighting in Bitcoin, let’s break down how each player gets funded, and what their incentives are for social or antisocial behavior.

Core’s incentives: Let’s start by pointing out the biggest factor in Core’s incentives: they aren’t paid. While certain members are employed by other companies such as Blockstream, their “job” as contributors to the Bitcoin Core repository isn’t compensated and has no employers. This means that they can’t be ”fired” for poor performance or for the errant social media blunder.

Now, there is one way to fire the core team: get together a competing team and develop an alternate client that the miners support instead. At that point, the incentives are: compete, or destroy the competition. In the case of Bitcoin Core facing a competing client in the form of Bitcoin Unlimited, the approach has decidedly been the latter, with some Core developers openly, publicly maligning Unlimited at any opportunity. Don’t blame them, they’re incentivized to do so.

Miners’ incentives: As those who effectively run the network, miners have the one true “vote” in the Bitcoin ecosystem, and as such need to worry much less about the concerns of other actors. However, as they are the only players in Bitcoin to receive funding directly from the blockchain, they are incentivized to take whatever action ensures maximum profitability. This means that as long as Bitcoin’s value is high enough, and fee revenue is sufficient, miners will remain complacent. High fees and slow confirmation times are not a problem for miners, until Bitcoin’s usability drops to the point of tanking its value, and fees become high enough that transactions diminish to the point of net revenue loss.

Note: Because of the nature of Bitcoin’s mining difficulty, most mining has collectivized into large mining pools, which operate as businesses. This provides some additional incentives to not rock the boat in a way that would hurt profitability. See the point about business incentives below.

Community incentives: The “Bitcoin community” can include anyone who holds Bitcoin, receives and gives Bitcoin payments, or generally has an opinion on Bitcoin. Aside from those who work in Bitcoin (see businesses below), only community members with holdings of any significance have any incentives in the ecosystem, and even those can “cash out” at any moment, transferring their holdings to another coin or leaving cryptocurrency entirely. This means that the average community member can engage in the most vitriolic trolling imaginable, and whatever the outcome of the scaling debate still be free to use and hold Bitcoin as they see fit. There are no ramifications to destroying community harmony.

*EXCEPTION* Business incentives: The one exception in this whole thought exercise is the Bitcoin business community. With certain notable outliers such as celebrity gossip magazines, most businesses hate drama. They thrive on positivity, mutual cooperation, and trust. Have any doubts? Next time you have a bad experience at a hotel/restaurant/airline/etc., instead of emailing your concern, tweet it. See how quickly the company springs into damage control mode to avoid a viral tweet causing them to lose business.

It’s the same in the Bitcoin world. Companies have largely remained agnostic, hoping for a scaling solution while attempting to remain above the drama. Purse.io even tried their own sincere, yet a bit naive, hand at solving the scaling debate through a solution aimed at pleasing both sides, and we all saw how that ended up.

In contrast with Bitcoin’s “miners take all” model, Dash’s structure divides the block reward into three parts: 45% to miners, 45% to masternodes, and 10% to a treasury. Masternodes must stake 1,000 Dash and help run the second tier of the network, and vote on the protocol level for the allocation of that 10% treasury to community projects and Core development. This means that actors in the Dash network already have a good thing going, and aren’t as susceptible to outside interests or insider scrambles for a larger share of that sweet crypto pie.

Core’s incentives: In a nutshell, Dash Core is paid by the network, and that same network can fire them at any moment. The Core team submits budget proposals every cycle for salary, office space, expenses, and anything else they might need to do their job. If, as a whole, Core displeases the masternode network, a new development team can pop up, submit a budget proposal, and step right into Core’s role and salaries. Even if Core as a whole does a great job, but a certain member has sowed discord, the masternodes can withhold their votes for Core’s salaries until the rogue member has either been disciplined or eliminated from the team. The Core team has in their best interests not only the creation of a quality product, but also to avoid losing votes support through interpersonal issues.

Miners’ incentives: Miners in Dash have largely the same incentives as in Bitcoin, except that their share of “voting power” is much smaller. Effectively, miners are incentivized to keep calm and mine on. As long as the masternodes and developers don’t collude to implement some change that would wreck miner profitability, there’s no reason to even threaten running a competing client. Disharmonious miners are encouraged to exit the system by creating their own implementation of Dash, surely without the profitability of an established network.

Masternodes’ incentives: As those with the most skin in the game, masternodes have one thing on their minds: long-term value of their investment. A Bitcoin holder can prioritize short-term gains, and may even profit from selling, having the value crash, and buying back in at a lower cost. Masternode holders have setup costs in time and resources, and every time they move their collateral they are bumped to the back of the payment queue. While Bitcoin investors can make profits either through long-term holding or through short-term “buy low sell high,” Dash’s masternodes encourage investors to hold long-term, and make decisions for the best future of the network.

While masternodes do have a great deal of power in the network, they also have the most fragile incentive structure: the long-term value of the coin. Pay the wrong dev team that pushes out terrible code? Dash’s value tanks. Make decisions that hurt miners too much? Network suffers, value tanks. Fight with the Core team? Valuable members might quit, value tanks. Fund crony proposals for short-term gain but provide no real value to the network? Value stagnates, or tanks if the word gets out. See a common theme here? Masternodes, like every other actor in the Dash ecosystem, are directly incentivized to make the coin and its community as strong, healthy, productive, and drama-free as possible.

*WILD CARD* Other organizations’ incentives: Now that Dash has grown to a solid top-five cryptocurrency, other organizations have risen under the greater Dash DAO, such as the Dash Force. Just like the Core team, these organizations must compete for the same funding from the masternodes. Since anyone can own a masternode with sufficient funds, it’s in the best interests of any sub-DAO organization to avoid making enemies. Two different sub-DAO projects may end up competing with each other, but are forced to do so politely, as negativity in said competition will surely cause the masternodes to vote for the less troublesome project.

Bitcoin’s community has certainly attracted some toxic actors, but considering the community’s incentives, can you really blame them? While nothing is perfect, Dash’s ecosystem remains one of the most positive and harmonious in cryptocurrency, generating very little internal drama. After all, since everyone profits from getting along and working together, can you really blame them?