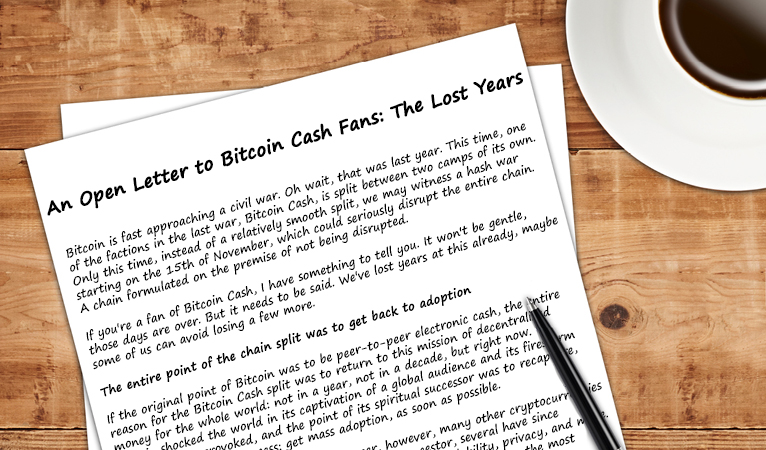 Bitcoin is fast approaching a civil war. Oh wait, that was last year. This time, one of the factions in the last war, Bitcoin Cash, is split between two camps of its own. Only this time, instead of a relatively smooth split, we may witness a hash war starting on the 15th of November, which could seriously disrupt the entire chain. A chain formulated on the premise of not being disrupted.

If you’re a fan of Bitcoin Cash, I have something to tell you. It won’t be gentle, those days are over. But it needs to be said. We’ve lost years at this already, maybe some of us can avoid losing a few more.

If the original point of Bitcoin was to be peer-to-peer electronic cash, the entire reason for the Bitcoin Cash split was to return to this mission of decentralized money for the whole world: not in a year, not in a decade, but right now. Bitcoin shocked the world in its captivation of a global audience and its firestorm of adoption it provoked, and the point of its spiritual successor was to recapture, and expand on, this success: get mass adoption, as soon as possible.

In the long decade since the legendary whitepaper, however, many other cryptocurrencies have been spawned. Blessed with the foundation of its ancestor, several have since improved on the original design in the areas of governance, scalability, privacy, and more. Say what you will about viability as a currency, Bitcoin is clearly far from the most modern or advanced of its kind. The entire selling point of Bitcoin Cash, a much newer project than many of these other coins, was never to compete in terms of features, but to use the original network effects and add to them to make the first widely-adopted cryptocurrency. Without mass adoption, there is no point.

For adoption as currency, Bitcoin Cash has been an absolute mess so far

Unfortunately, as far as the one prime selling point, Bitcoin Cash has had a bumpy road. To begin with, a new cryptocurrency offering nothing new in terms of tech coming on to the scene late 2017 is a rough prospect, especially having to be integrated into all the various exchanges and services from scratch. Adding to that challenge is the differentiation issue, where both candidates for “one true Bitcoin” have been confused with each other. Ignoring the hyperbole of droves of users buying the wrong coin, I know first-hand situations where this has happened, and it’s been exacerbated by misleading statements such as claiming Bitcoin Cash has been around since 2009, dropping the “Cash” part of the name entirely, and using Bitcoin.com, @Bitcoin on Twitter, and the /r/BTC subreddit to refer to BCH. What’s more, the new address format made to prevent accidentally sending the wrong Bitcoin has still not been implemented universally, and the predominant payment processor, BitPay, required a certain type of payment protocol that was not supported by many wallets, and still is not universally accepted. And, finally, the struggle for dominance between the ABC and SV implementations will render the whole chain risky to use for who knows how long. From the beginning to the present, it’s been a right mess.

The best illustration of the problem was something that happened at a Dash meetup recently. Someone had set the waitress up with a Bitcoin.com wallet, so the one person at the meetup with Bitcoin Cash tipped her for the rest of us. Later she was unsuccessfully attempting to pay an invoice at the same restaurant. When I went to help her, I saw she was trying to use Bitcoin Cash to pay a Bitcoin invoice. I helped her switch the payment method to Bitcoin Cash, and yet again we were unsuccessful, since the processor used the old address format that the new wallet couldn’t send to. How long would it take to explain all that? And now, with the impending hash war drama, she may not be able to use her coins at all for a while. No one may. Whichever user or merchant has stuck around past the name confusion, address differences and compatibility, may finally give up after whatever happens in the hash war. This is not a recipe for mass adoption, and certainly no reason to go with a more primitive cryptocurrency.

Satoshi’s revolution has been far beyond Bitcoin for years now

I understand nostalgia for the hope Bitcoin originally provided, but in the long decade since, a whole lot has happened. Thousands of cryptocurrencies have been created, worth billions of dollars to date, implementing dozens of tweaks, extra features, improvements, models, and more. Even starting from the premise that Bitcoin is the most important and will persist and dominate long-term, there’s no denying that the scope of cryptocurrency has expanded radically beyond that single chain, and will likely to continue to do so exponentially. Whether Bitcoin itself, or whatever we call by that name, is going to keep leading the way or be the one that’s adopted as near-universal money, it doesn’t have to be. Bitcoin can go away and its legacy is still immortal. Without this central point of failure, the value of preserving something called Bitcoin has fallen significantly.

How many more lost years before we finally get to focusing on what matters?

Let’s face a hard truth: the desire to re-establish Bitcoin as peer-to-peer electronic cash was never about adoption first and foremost. Obviously without being able to speak for every single user out there, at its best, it was about achieving mass adoption through a belief that protecting the Bitcoin branding and network effect had to come first. More commonly, it was a scramble to try to save Bitcoin from failing. In a vacuum, that’s a very noble cause. In context, and measured against opportunity cost, it’s a purely unnecessary nostalgia move that casts aside what should have been the number one goal from the beginning: freeing the world from financial and economic slavery. If trying to prop up the Bitcoin brand diverts from this main goal, then those two goals are antithetical.

In late 2016, Bitcoin ceased to work as digital cash. After waiting around for a whole year of stalled adoption, Bitcoiners forked off and convinced themselves they weren’t starting from zero. A year after that, we’ve dealt with name confusions, crossed addresses and payment protocols, and now a hash war that threatens the viability of the whole chain. Dash, and many others, were around, and growing, the whole time the big block contingent of Bitcoin has been stalling or flailing around. Just imagine where we’d be today if only they had jumped on the Dash train when I did over two years ago.

How many more lost adoption years will we have to endure before the rest of the crypto faithful get their priorities straight? Or rather, how many more years until we collectively call out the camp chasing whatever Bitcoin-branded fork persists at that time for being disingenuous? The clock is ticking.