Now that Amanda has announced her Dash retirement I thought it would be interesting to review her history with the Dash treasury. 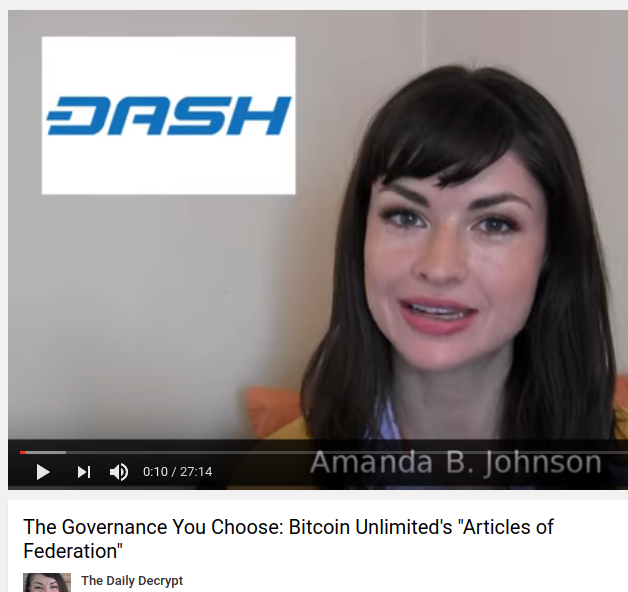 First Dash Sponsored episode of Daily Decrypt was on Jan 4, 2016.

This is the first time the Dash logo shows up with Amanda.  Before moving to sponsorships she was accepting donations – from the very first show Dash was one of the cryptocurrencies she was accepting.  Amanda first interviewed Evan Duffield at the Latin American Bitcoin Conference held in Mexico City on December 4th and 5th, 2015.

The first episode of DASH: Detailed was on June 15th 2016 titled “What Stands Between Digital Currency & ‘Mass Adoption’?”

A series of 6 videos explaining in easy to understand language all about Dash.  Published in September 2016 the first episode has 67,000 views, that is a lot a people learning about Dash.

With the popularity of Dash: Detailed Amanda and Pete (the manservant) were asked to appear at different events and asked the Dash Treasury to help fund some of them.

Amanda to Present Evolution at Anarchapulco’s “Cryptopulco” 139 DASH (added on 2017-01-22)  Votes: 690 Yes / 5 No / 0 Abstain  – Reimbursement to Amanda and Pete Eyre for travel and lodging in Acapulco, Mexico, where Amanda will present DASH Evolution at Anarchapulco’s special day of “Cryptopulco” on February 28th. Pete will record presentation and upload it to YouTube the same day.

The first DASH:Spotlight show was with Ryan Taylor, Dash Director of Finance.

The final DASH: Detailed show was “Erik Voorhees Talks Prism, World’s First Trustless Portfolio Platform” on May 31st 2017.   Here is the full playlist of all of the shows.

The Move to Global Market Outreach

Amanda says it best in the proposal:

The concept of DASH Detailed was created with one goal: show the cryptosphere what they’ve overlooked in Dash. To achieve this, I created explainers about our system’s technical aspects. I made tutorials on how to interact with our network. And I gave lots of news updates.

I now feel that this particular mission is complete. It is doubtful that anyone within the cryptosphere has not heard of Dash, or is somehow unaware that we have many videos that can teach them everything they need to know.

Current Dash users each know their local markets far more intimately than we as a network ever could. Each knows his own culture, his own language, and his own community’s monetary pain points. Fortunately for us, most of our users probably also have their own social media profiles!

So I propose that we mobilize them.

I’d like to re-purpose my weekly Wednesday videos. Instead of news, I’d instead like to announce a new and fun way my viewers can spread Dash usage – both within their local communities and to their social networks. Simultaneously.

The original  proposal called for monthly costs of:

The first campaign was to give $20 to anyone that got a new user to install a Dash wallet, it was immediately overwhelmingly successful.  They quickly called for a vote of masternode owners to see if there was support for the extra funding that would be needed to continue the campaigns which passed.

By the time the 3 different campaigns had ended they had:

After the first month of outreach campaigns no new proposals were submitted. On Aug 8th 217 Amanda announced on Reddit that she would be “retiring” from Dash and pursuing other interests.

Dear Dash investors,
First, let me starting by saying – great job! Since my last video publication for Dash almost two months ago, I’ve been closely following the network’s developments (of course). And I’ve got to say, I’m continually impressed with the wisdom, foresight, and ambition I’m seeing from proposal-holders, subcontractors, voters, and pre-proposal-makers alike. I hope and believe that this trendline continues.

I write you today to give a final and formal “thank you” for having hired myself, and my partner Pete, to produce media for you over the course of a year. Employment by the Dash network remains the brightest and most humbling star in my professional life.

I also want to provide clarity that I’ve decided not to seek additional public work for Dash. 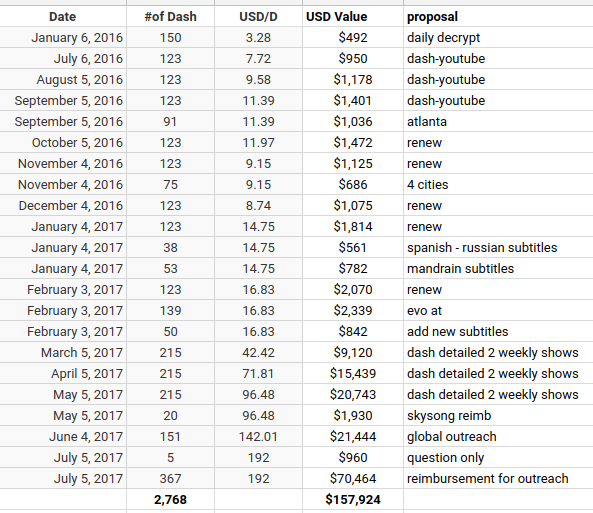 Looking at the numbers when you take out the reimbursements for direct expenses having a year of Amanda B Johnson and Pete doing video production for Dash was pretty reasonably priced.

I am sure I speak for the greater Dash community when I wish them the best in all they do.